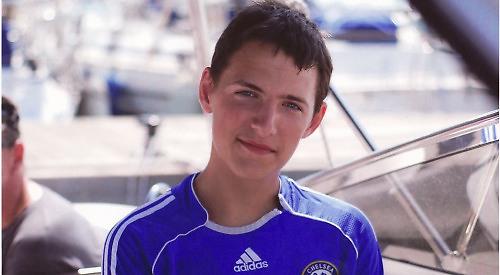 A BENCH which commemorates a young man who died in a car crash has been vandalised.

A group of teenagers smashed several slats of the wooden seat honouring Joshua Smith, which is on the touchline at Rotherfield United Football Club’s Bishopswood ground in Gallowstree Common.

The 19-year-old, a keen footballer, who lived in Ashford Avenue, Sonning Common, and had just finished studying for his A-levels at The Henley College, died early on September 14, 2012 when his Ford Fiesta left the road and hit a tree in Peppard Road, Emmer Green.

Hundreds of mourners attended his funeral at Grace Church in Emmer Green.

The bench was installed a couple of months later after friends and relatives campaigned to raise £1,000.

It was unveiled by former Reading and Wales footballer Ady Williams at a ceremony attended by many of Mr Smith’s loved ones, including his mother Sam Kelly-Smyth, who now lives in Henley.

The vandals were seen loitering at the pitch on Friday, June 5, and it is believed they jumped up and down on the bench until the wood splintered. Mr Smith’s family were notified when the damage was found the following day. His grandfather Cliff Stevens, 70, from Tokers Green, said it had also been vandalised about two years ago and could now be removed to prevent another attack.

His wife Sheila played a major role in the fundraising before she died of cancer, aged 65, about a year later.

Mr Stevens, who is now battling the disease himself, said: “We’d like to leave the bench there but we’re wondering whether it’s worth it.

“You don’t want to show you’re giving in but the sad fact is this will probably happen again. There are many lovely people in this community who are proud to get good use from it but not everyone is as respectful.

“Lots of people remember Joshua to this day — he was a very special young man who was loved by so many. They still go there to sit and think about him and there’s also a five-a-side tournament in his memory.

“We’ve had a really lovely response as one person has offered to repair the bench free of charge while another had offered to pay to fix it.

“It shows there are decent people out there, too, but we’re still thinking of removing it because of these mindless idiots. I’m sure their parents are proud.”

Mr Stevens said there was also a problem with litter during the coronavirus lockdown.

He said: “We’re seeing lots of discarded bottles and other rubbish as well as bags of dog poo.

“Unfortunately, people have a lot more time on their hands and these big open spaces are vulnerable, especially if they’re a little out of the way.”

The club doesn’t expect police to find the culprits but has urged Mr Smith’s family to report it anyway so there is a record. It has also offered to help with repairs. Chairman Andy Tidswell said littering had increased dramatically and he and other officials had to clean up almost daily.

The club’s waste disposal costs have rocketed because it pays Grundon to empty its large commercial bin almost weekly whereas before lockdown this was only needed a handful of times a year.

“You couldn’t print what I actually think of the vandals but it’s shocking behaviour — they’re the lowest of the low,” said Mr Tidswell.

“Obviously we’re happy to support the family however we can.

“We have no issue with people using Bishopwood but not everything is being taken home or going in the bins we provide and we don’t think that’s too much to ask.

“If we see people dropping rubbish then we’ll pull them up on it but we’re a club of volunteers and can’t be there all the time.”

The club has been repeatedly targeted by vandals. Last year it faced a bill of thousands of pounds after youths ploughed a stolen car into goalposts then set it alight.

In 2017, a gang stole three golf buggies from Caversham Heath Golf Club in Chazey Heath and drove them to the field, then set them on fire along with fencing, bins and benches, causing £10,000 damage.