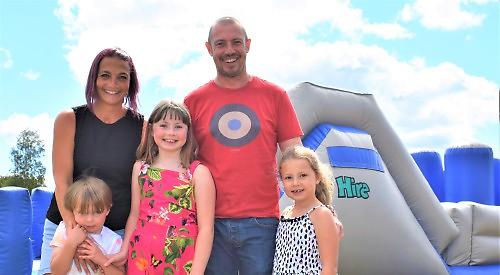 NEIGHBOURS in Sonning Common celebrated a girl’s ninth birthday by singing in the street.

About 25 people gathered outside Ellie Newman’s home in Birch Close to mark the occasion.

They sang Happy Birthday to her and gave her gifts such as brownies, chocolates and a necklace.

They wanted to surprise her because she has made them gifts every Sunday since the coronavirus lockdown began.

Ellie had feared her neighbours would be isolated and need contact. She would deliver items including biscuits, fudge, word searches and a story about mermaids.

On her birthday, Ellie received presents from her parents and was visited by about 10 family members, including her grandparents. The family had hired a bouncy castle, which she played on before her neighbours sang to her at 11am on July 11.

Ellie was delighted they wanted to celebrate with her. She said: “I felt happy and surprised. I didn’t know what was going to happen. I was very confuzzled, which is my way of saying I was confused.”

Her mother, Kelly Genery, saw that Ellie was very pleased. She said: “Ellie’s chin hit the floor and our next door neighbour Chrissie said to Ellie that everyone was really appreciative for everything she has been doing. They wanted to celebrate her special day and it meant a lot to a lot of people.

“Ellie was a bit taken aback by everyone’s kindness. She was showered with gifts, had a great time and was spoilt.” In the evening the family had a barbecue and Ellie camped in a tent with her mother in the garden. Miss Genery said it had been an important day for a variety of reasons.

She said: “She really enjoyed the day. Most of it was playing and eating cake. She had a rainbow unicorn cake made with lots of different colours.

“It just meant the world and I know all the neighbours are really grateful for what she’s done for them. She’s such an emotional child and worries an awful lot, which started the whole thing off in the first place.

“For them to be so appreciative about what she’s done has meant so much to her. She’s relaxed a lot about the current situation and the gifts she makes have given her a focus during the lockdown.” Ellie, who lives with her mother and siblings Lyla, five, and Freddie, three, has also delivered coasters to the 26 homes neighbouring her in the close.

Ellie explained that she was concerned for her neighbours’ welfare. She said: “I felt very sad that no one could go outside and all the people in the road couldn’t visit family and I decided to give them a gift. At first I only knew three people in the road but now I know everybody and feel we’re really close friends.”

She acknowledges the influence of Chris Hirst, her headteacher at Sonning Common Primary School, adding: “I feel I’m doing a good deed. Before the lockdown Mr Hirst said ‘do a good deed: one act of kindness can do so much for one person’. I thought I would listen to him and try to do a random act of kindness.”