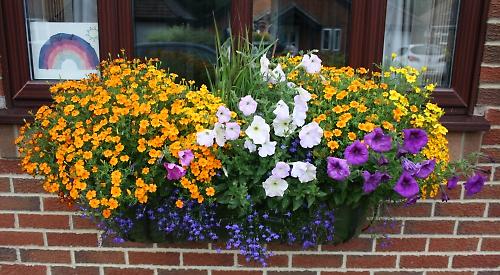 A MAN has won Sonning Common’s front garden competition a year after he was runner-up.

David Wardle took the title with his colourful display of petunias, hydrangea, dahlias, marigolds and other plants outside his home in Ilex Close where he has lived with his wife Vivienne for six years.

The 81-year-old retired carpenter and joiner was nominated for the competition by a member of the public without his knowledge. It was his fourth nomination.

He said: “It is very nice that people appreciate what we’re doing. I put a lot of hours in but it’s not hard work if you enjoy it and it’s fun.”

His garden was one of 16 gardens to be judged by five members of the Chiltern Edge Horticultural Society, which organises the competition. Second place went to Bob and Sylvia Newman, of Reades Lane, and third to John and Stella Humphries, of Crowsley Way.

Mr Wardle said he was able to produce a good-looking garden despite garden centres being closed in the spring as a result of the coronavirus lockdown so that he couldn’t buy any new plants.

“I couldn’t get hold of things I really wanted but everybody was in a similar position,” he said. “Luckily, I still had all sorts.

“It was great to be able to garden during the lockdown. I don’t know what people did if they weren’t out in the garden, really.

“It’s just something I enjoy doing and I get up each morning, go out and see how things are doing. When you’re retired it gives you a reason to get out and do something. I’m never satisfied but it’s nice. Sometimes you have to go across the road and take a step back, look and think, ‘It’s not bad’.”

Mr Wardle said many people replaced their front gardens with hardstanding for their cars but gardens like his made communities more attractive and demonstrated that the owners took pride in their property.

“It’s nice to see something grow,” he said. “When things turn out nice that’s really good for everybody. I think the neighbours like the view and they also keep their front gardens looking nice. They are pretty and all the colours seem to blend.”

All the entries were judged for their tidiness, plant variety, shrub and tree variety, overall effect and “wow factor”.

Janet Evans, a judge and membership secretary of the society, said: “Mr Wardle’s garden has a real wow factor and the colour, tidiness and all the different varieties of flowers make it good. There were yellows, blues and pinks and such a good variety. I thought it was the best one.”

She said the Newmans’ garden was also very colourful, adding: “It was very nice and there was plenty of variety.” She also liked the colourful salvias in the Humphries’ garden, saying they were “unexpected”.

Mr Wardle will be presented with the winner’s trophy by society chairman Nigel Crush once it has been engraved with his name.