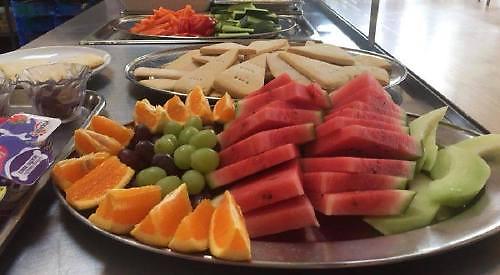 THE caterer at Sonning Common Primary School has been praised for providing hot school dinners and food boxes to children during the coronavirus lockdown.

Sarah Sayer was singled out by headteacher Chris Hirst, who said she had gone above and beyond the call of duty.

He nominated her for the National Association of Head Teachers’ #aboveandbeyond person of the week scheme.

Mr Hirst said: “So many staff have gone above and beyond but I could only pick one.

“Sarah Sayer provided hot school dinners throughout lockdown for the 10 to 100-plus children who were in.

“She also made 30 plus food boxes every week for free school meal pupils and families who could not get to shops. Definitely above and beyond.”

Mrs Sayer, 53, of Grove Road, Sonning Common, started her own catering company, Kites Kitchen, nine years ago at the same time as she began working at the school.

She said: “During lockdown I wanted to make sure the children had access to plenty of good food when they couldn’t come to school.

“Although I only needed to provide the equivalent of five meals each week, in reality I put enough in for at least three times that.

“It was really nice to help the community because the free food vouchers given to families in lockdown were not eligible in the Co-op, which is our local shop.

“So many families who wanted to use them had to get a bus to the nearest supermarket.”

Mrs Sayer, whose own four children all went to the school, made the food boxes and the school’s secretary Chrissy Matthews helped to deliver them.

She said: “Chrissy and I delivered the food boxes to people and it was really nice to be able to see the families we were helping.

“Chrissy was in the school every day. She’s been a huge help.”

She said she also put recipe cards in the food boxes, adding: “We wanted as much fresh food in there as possible.

“We tried to make it fun as well by putting child-friendly recipes in there like bolognese sauce, brownies and flapjacks.

“It was nice because people would email in pictures of what they had made.

“For me, it has never been about the money, it’s all about the children and the food. Obviously, there were budget restraints but within that we tried our best. We hid vegetables in everything we could and made almost everything from scratch using high-quality ingrediants.”

Mr Hirst said: “Both Sarah and Chrissy Matthews provided a lifeline for some or our families who were most in need.

“Without their help many of the families they supported would have had no other option than to turn to food boxes.

“It is another example of the staff at Sonning Common primary going above and beyond to support the children in our care.  I am so proud of both of them.”