Teacher’s warthog toy hunt is big hit with littles ones 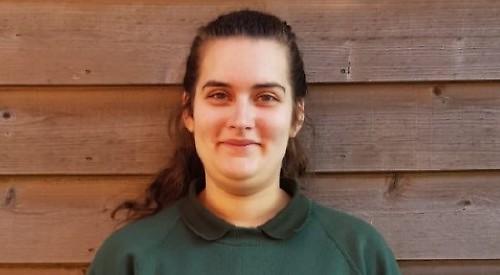 A WOMAN from Kidmore End helped to keep village children occupied during the coronavirus lockdown with a sort of treasure hunt using furry toys.

Emma Caroline, 26, invented Where Walter Wanders, a game where children had to find pictures of a character called Walter the warthog hidden around the village.

Miss Caroline, who is a teacher at Chalkhouse Childcare Services, a pre-school in Chalkhouse Green Road, had come across the toy before the lockdown, thinking it would be a useful classroom resource.

Then when the lockdown happened, she wanted to help parents keep their children active.

She said: “Living in the village, I met a lot of the parents on walks and they said they needed activities for the kids.

“Where Walter Wanders was pictures of him hiding in different places.

“I would leave lots of pictures around the village, in places the kids would usually visit, like the postbox or on the walks we’d go on together at the pre-school.

“The pictures would have shapes, numbers, colours or season themes. Some had cooking or arts and crafts ideas.”

Miss Caroline, who lives in Wood Lane, also created a Facebook page for the hunt so children who weren’t local could take part.

She uploaded group time videos, where the children could talk about the weather, or the character of Walter.

It was so successful that she added another character called PB the Polar bear. Miss Caroline, who has lived in the village since the age of four, said: “Lots of parents said the children enjoyed it.

“We had lots of pictures and videos from the parents of the kids out looking for the pictures.

“It also kept me busy and helped with the transition of being very busy at work to doing nothing. ” The pre-school will re-open on Monday after under a week of deep cleaning.

Miss Caroline said: “Myself and others are a bit nervous about going back but it’s a different situation.

“It’s about getting our heads around it and making sure the children are safe.”