Women save nursery cafe from closure in lockdown 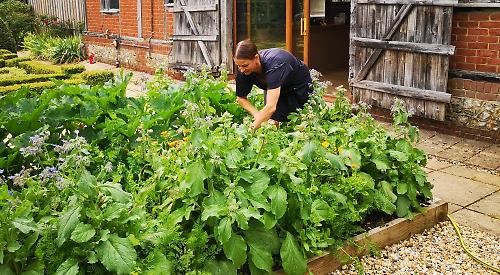 TWO friends have saved the café at the Herb Farm in Sonning Common from closing.

Caroline Cann, who lives in the village, has taken over the business with her friend Donna Gallimore, from Reading.

The pair became friends 15 years ago through their husbands, Michael Cann and Chris Gallimore, who played cricket together at Sonning Common Cricket Club.

The café, which is now called The Barn, was the responsibility of Richard Scott, who owns the Herb Farm in Peppard Road.

He wanted someone else to run it because he was struggling to make a decent profit from it.

Mrs Cann used to work part-time in the gardens at the Herb Farm so when she heard about the opportunity she took it.

She said: “Richard had just had a third grandchild and he wasn’t making enough money from the café and was going to have to shut it.

“He needed someone here all the time, so I asked him if he’d be interested in handing it over to me and, to my surprise, he said yes.

“I rang Donna as soon as Richard said we could take it over. She had just been made redundant so it was perfect timing.”

Mrs Cann works front of house and Mrs Gallimore is the chef who uses her own vegetables grown in the gardens behind the café.

Mrs Gallimore used to work at Field Kitchen in Nettlebed where she did a lot of her training.

Mrs Cann, who has had a number of jobs, including being a teacher, said: “Donna has always been a good cook.

“Our most popular product is her homemade sausage rolls.”

The Barn also sells cakes, puddings, tarts, quiche, bagels and more, which are all made on site by Mrs Gallimore and the four members of staff, two front of house and two in the kitchen.

The women took over the café just before the coronavirus lockdown so it was closed for three months.

They used the downtime to install a new kitchen, paint the chairs and open up the space more for customers.

Mrs Cann said: “It was also good practice to get everything working.”

The café re-opened on June 24 for takeaways only and then fully on July 4.

It has covid safety measures in place, including regular handwashing, a one-way system and outdoor seating for customers. Mrs Cann said trade had steadily increased, adding: “People were desperate to go for a cup of coffee.

“We’ve had many elderly people come here and it has been the first place they’ve been since lockdown as they feel safe. We are trying to do the best we can for them.”

The staff were furloughed at the start of the lockdown and then made redundant as it was feared the café would close.

Mrs Cann and Mrs Gallimore hired new staff and took back some of the old ones.

Mr Scott, who opened the Herb Farm in 1986 and the café in 2003, is pleased with the progress the women have made.

He said: “They’ve done fine and it has been a great relief to not have to run the café myself.

“We had no plans for it, we were just going to close it.

“They’ve come in and revamped it because it was looking a bit rundown. In a way, the lockdown came at a good time.

“It was time for a change anyway and it all fell into place.”

The Herb Farm itself closed to the public during lockdown but was still doing local deliveries.

Since it re-opened, customers have been returning but Mr Scott is concerned that some of its annual events, such as the Christmas market, will not go ahead because of the virus restrictions.

His son-in-law, David Burton, runs the business day to day.