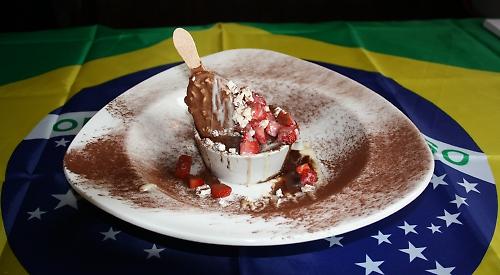 A PUB in Sonning Common has a new pop-up Brazilian menu.

The Bird in Hand in Peppard Road has hired Andre Moure, who is originally from São Paulo.

Mr Moure found his passion for cooking at his family’s restaurant where he learned to make dishes such as churrasquinho misto, or barbecued meat skewers.

He then went to the Instituto Gastronomico das Americas, a culinary school where he was taught cooking techniques and how to run a business.

He then ran his own restaurant, called San Antonio, in São Paulo for eight years before leaving because Brazil’s taxes were too high.

In March, Mr Moure moved to Reading with his wife, Carla, 37, and their eight-year-old son Caio.

He was hired by the Bird in Hand as a chef and impressed Dan Wilson and his wife Helen Blundell who run the pub, with his Brazilian food.

Ms Blundell, 42, said: “He would even try to make the normal menu a lot more interesting. I think it was his way of nudging us.”

She and her husband felt the pub needed a new start after being closed for three months because of the coronavirus lockdown.

Ms Blundell said: “I think he would have got bored if we didn’t let him make the Brazilian food as well.”

Mr Wilson, 48, said: “You can get pub food anywhere but it’s not often that you can work with a Brazilian chef. It’s hard to get people to come out anyway so we need to give them something to come out for.”

Mr Moure said: “I am enjoying it here in Sonning Common so far but it is a lot colder than San Paulo and I’ve already had a cold.”

The pop-up menu is a permanent addition to the pub’s existing menu.