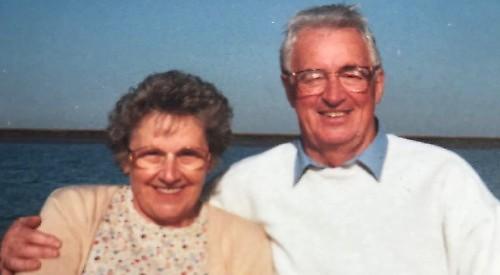 She was the youngest of six children, including five girls, for Sidney and Martha Smith.

Sheila attended school in Nettlebed along with her siblings and enjoyed village life.

In 1939 her brother George joined the war effort. He was an aircraft engineer on HMS Courageous, an aircraft carrier.

The ship and four destroyers were on patrol in the Atlantic, searching for German U-boats, when it was struck by two torpedoes launched by the Germans.

George and the rest of the crew of about 500 went down with ship just south of Ireland.

This had a huge impact on Sheila, who was just seven at the time. Her big brother was her hero and she never got over the fact that his body remained at sea.

Her sister Joyce emigrated to Iowa after marrying Jack Sharp, an American soldier based near
Nettlebed.

Her eldest sister Evelyn Kmiecik emigrated to America some years later with her husband Joe and children Sue and Sidney Wilson.

Her sister Brenda remained in Nettlebed to run the village grocery store, which had belonged to their parents.

Her remaining sister Alice was married to Bill Twine, who was a prison officer and was based all over the country, including Dartmoor prison.

In about 1950 Sheila met Joe Hayward, a lad from Rotherfield Peppard.

He came to Nettlebed to play in goal for the local football team. which was run by Sheila’s father, “Gunboat Smith”, as he was known.

On the September 8, 1952 Joe and Sheila were married and they went on to have five children, Christine, Randy, Celia, Daphne and Vivienne.

They had a happy marriage of 55 years until 2007 when Joe died. This left a big hole in Sheila’s life.

Joe was well known to many in Henley and the surrounding area as he was a Henley postman for almost 30 years.

The couple’s life together was not easy. They worked long hours to provide for their children.

They were what was recently described as “a salt of the earth couple” — a huge compliment.

Sheila and Joe were extremely kind and generous to all they knew and were very well respected in the village of Sonning Common, where they lived for almost all their married life.

Sheila spent many years working as a carer or, as it was called in the early days, a home help. She enjoyed looking after the old folk and encouraged her children to do the same, sending them out shopping for the elderly at the village shop. There were no supermarket deliveries in those days.

On Sundays she would always plate up an extra roast dinner and she would ask one of the children to take it along the street to an elderly neighbour who she knew would not have cooked for themselves.

She didn’t have to do this; it was all out of the goodness of her heart.

Later, Sheila worked at Heath & Watkins, the hardware store in Sonning Common, until she retired.

Sheila enjoyed baking and was well known in the area for her lovely cakes.

After Joe passed away, she became a regular at the Sonning Common lunch club, meeting up with people that she had known for almost all her married life.

Sadly, in 2017 Sheila was diagnosed with mixed dementia, vascular with Alzheimer’s.

It became apparent that she could no longer care for herself in her beautiful bungalow, the home she cherished.

She was moved to the wonderful Wardington House nursing home, near Banbury.

She required one-to-one care and was treated like royalty by the staff for which the family will be forever grateful.

Unfortunately, Sheila contracted covid-19 and, while she had recovered from the virus, it had left her too weak to survive. She passed away peacefully on January 19.

The funeral is by invitation only due to the covid-19 restrictions.