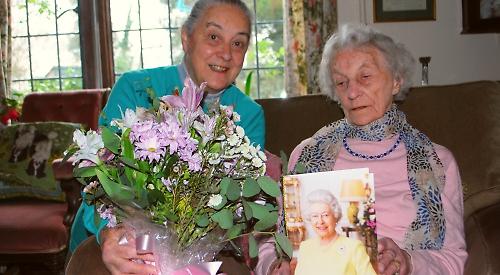 THE oldest resident in Peppard celebrated her 112th birthday on Friday.

Mollie Walker MBE, who lives in Kingwood Common, has lived in the village since 1923.

She celebrated at home with her daughter Sheila and son Graham, who have been her support bubble throughout the coronavirus pandemic.

Miss Walker said they all usually celebrated her mother’s birthday at the Unicorn pub nearby but all pubs were currently closed.

She said: “It’s very difficult at the moment but we’ve both had our first vaccinations, which is great. My brother visited as well as he is in our support bubble and we had a nice meal at home.”

Mrs Walker was married to John, a director of Car Services in Caversham Road, Reading, and worked for Miles Aircraft during the Second World War.

Mrs Walker helped at the prisoner of war hospital in Kingwood Common, known as the Kingwood Camp, run by the Americans.

One of her memories of the time is seeing two German prisoners of war, who had been allowed to work as doctors, walking across the common in uniform.

After the war, when the hospital was dismantled, Oxfordshire County Council wanted to develop the common land.

Mrs Walker was so determined to preserve it that she co-founded the Friends of Kingwood, later becoming its secretary. The group won its fight with a ruling by the House of Lords.

Mrs Walker was a member of Peppard Parish Council from 1954 to 1979 and was made an MBE in 1978 for her work with the Women’s Royal Voluntary Service.

To mark Mrs Walker’s 100th birthday, Peppard parish councillor Ilse Eve presented her with a bouquet of flowers and planted a copper beech tree by the sports pavilion in Stoke Row Road.