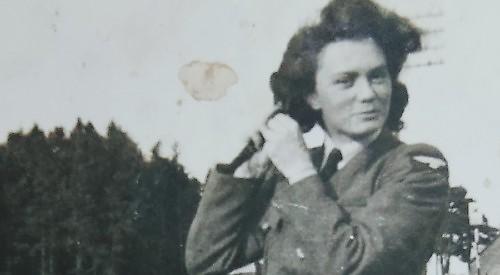 A WOMAN from Sonning Common has celebrated her 100th birthday.

Margaret Tudor, who is known as Maggie, celebrated her birthday on Monday last week with her daughter Margaret Fish at her home in Kennylands Road.

She received flowers, cards and presents including a soft toy cow, a Blackpool stick of rock and a photo book called Maggie’s Memories.

Mrs Fish, 71, said: “There was nothing else we could really do. We couldn’t have people here and we couldn’t go out so instead I just got her lots of different presents like at Christmas. She had a good day and she’s already halfway through her Blackpool rock.”

Mrs Tudor was born in Glasgow and had two sisters and a brother who were all older than her.

Her first job was working in accounts for a launderette in Glasgow. She had to be escorted through the building on pay day.

She then joined the WRAF where she fitted radar aerials from Wick to Cirencester.

Mrs Fish said: “She used to ride a bicycle, wear trousers and climb high ladders, all of which her parents would have disapproved of as being unladylike pursuits — had they known.”

Mrs Tudor met her husband, Philip John, on an RAF course and they were married within six weeks before he was posted to Tobruk in Libya for two years.

He went on to serve for 33 years and became a senior officer who commanded RAF Stafford. He passed away in 2015, aged 91.

During their 70 years of marriage, the couple moved 36 times before settling in Sonning Common in the late Seventies.

Mrs Fish, their only daughter, said: “Sonning Common has become my mother’s roots as she moved so much.”

Mrs Tudor used to be member of Sonning Common Women’s Institute and now spends much of her time knitting.

Mrs Fish said: “She has lived this long because she’s feisty and she’s quite the bossy boots — she has got an indomitable character.

“She didn’t want anyone to know she’s 100, which was quite difficult as everyone already knew she was 99. The health centre sent her a card so it was no secret. She had a lovely day and really did enjoy it.”