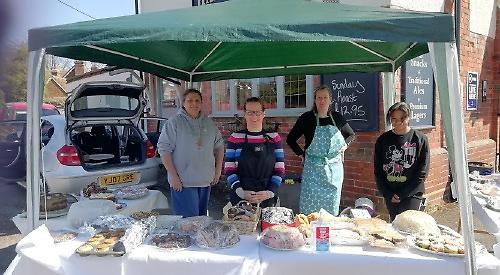 A WOMAN raised more than £600 for Cancer Research with a cake sale.

Jessica Philbrick, of Baskerville Road, Sonning Common. decided to support the charity after watching Channel 4’s The Great Celebrity Bake Off for Stand Up To Cancer. She set up a stall outside the Hare and Hounds pub in Woodlands Road on Sunday, selling cakes, biscuits, flapjacks and brownies donated by about 20 other people.

The whole lot was sold out in less than four hours.

Ms Philbrick said: “I couldn’t have done it on my own — it was made possible by the people who made cakes and came and bought some.

A total of £613 was raised with £100 being donated on a Just Giving page from people who couldn’t attend the sale.

“The whole day was really good — you think it’s going to be simple but it did take a lot of work.”