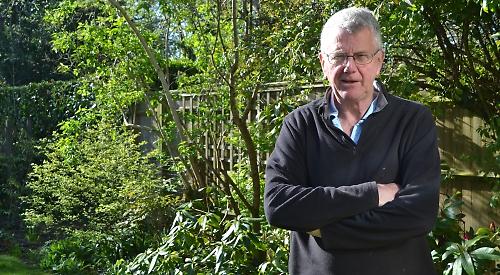 A PARISH councillor trying to stop a retirement village from being built in Sonning Common has had his own book used as evidence against him by the developer.

Tom Fort, a former BBC journalist and an author, spoke against Inspired Villages’ proposal for 133 flats in Blounts Court Road at a planning inquiry.

The hearing comes after the company appealed against a decision by South Oxfordshire District Council to refuse planning permission.

Councillor Fort told the inquiry that he opposes the development due to the impact it would have on the Chilterns Area of Outstanding Natural Beauty as well as the village’s neighbourhood plan.

He chairs the working party that is revising the plan, which allocates sites for new housing but does not include the land for the proposed retirement development.

Cllr Fort, who has lived in the village for about 20 years, told the inquiry that if the appeal was allowed it would render the neighbourhood plan as “superfluous.”

He said: “The main task is to allocate the houses but the greatest challenge is not the allocation of sites, it’s to get the support and understanding of the community and nobody likes new housing so it’s not an easy thing to do.”

He said this was achieved in 2016 when the original neighbourhood plan was approved in a referendum.

It was now being revised on the orders of the Government with a new target of 108 homes, subsequently reduced to 96.

Cllr Fort said: “Our first priority was to try to find room for family houses The reason is because new families mean new blood for the schools, for scout groups, youth clubs, football clubs, cricket clubs and more — that’s the way a village like ours renews itself.”

The Inspired Villages development would not contribute as the population would have an average age of 75.

“We are acutely aware of the need to address this need of housing for elderly people,” said Cllr Fort. “We have identified a site which we consider appropriate and we are in the process of processing it.

“There have been challenges but the biggest obstacle we’ve faced is this appeal. If the appeal was to succeed it would make the business of finding family homes superfluous.

“We have made significant progress in the working group and I remain confident that if this appeal is dismissed we can provide a plan by the deadline of December.

“There are many powerful reasons why this appeal is a very bad idea — right up there is the impact this this would have on our neighbourhood plan. It would be a terrible blow to the support and the success of this plan.”

Christopher Young, who is representing the developer, said the development would help free up family homes.

Inspired Villages’ research shows that 133 family houses of three bedrooms or more would be released with 39 to 64 of these being within 10 miles of the site. Mr Young said the development could go together with the neighbourhood plan as they had a common goal.

Cllr Fort replied: “With the greatest respect, that is what we’ve tried to do — consider both. Your 133 apartments would leave no room elsewhere for family housing.

“We’ve tried to find a balance of family homes and a modest development for a lot of elderly people, not an extra care development that’s right at the end of the market as there are other places for elderly people to live which don’t affect the plan and the AONB.”

He added that the retirement village would put more pressure on the existing infrastructure.

Mr Young then pulled out of copy of Cllr Fort’s book, The Village News: The Truth Behind England's Rural Idyll, which was published in 2017, and said: “This will be the more amusing part of the inquiry.”

He said the book referred to villages with “more charm” than Sonning Common and that Cllr Fort didn’t speak about the village “very highly”.

Cllr Fort defended the book and the village, saying: “Living here have been the happiest times of my life.”

Mr Young said: “You say, ‘The only remarkable thing about the village where I have lived for the past 20 years is how deeply unremarkable it is. If there is a village in England that is lacking more in distinction than Sonning Common I would very much like to visit it’.

“You mention the village has no ancient buildings, no village green and the church is tucked away next to a car repair shop.

“You say there’s no cricket ground, picturesque or otherwise, and you say there are prettier village ponds elsewhere and that it is tucked away at the edge of the settlement.You make a point that the pond is not a part of the village — the development could help add to that charm.”

Cllr Fort said he didn’t believe the developer would improve the pond in Widmore Lane.

Mr Young continued: “You say, ‘The countryside is not spectacular, what is important to us is that there’s enough of it to give us that feeling of being rural’.

“You talk about new blood and allowing the village to grow and sustain itself, which means bringing in new families and new people.

“People of course want to protect the AONB but it’s also important for sustaining a community to make sure there is new blood as well.”

Cllr Fort replied: “We allocated 50 family homes in the AONB on the northern edge of the village.

“These are still being built and that circumstance was special because in exchange for giving our backing, the field next to it was given to us for a recreation area which the village does not have.

“That at first was problematic to present to the village to accept but they did eventually.”

Mr Young replied: “The idea to achieve diversity is to accommodate different concepts of what a home could be, which is what we’re doing. We have a concept of a home which is more suitable for older people.

“I wasn’t being flippant, your book is, as the Guardian describes it, ‘delightfully curious’.”

The inquiry ended on Tuesday following a site visit on Monday.

A date for the inspector’s decision has not been set.