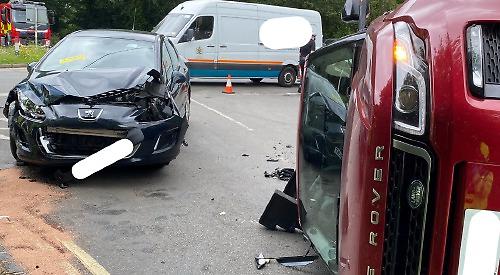 TWO cars were badly damaged after colliding at an accident blackspot in Peppard.

A red Range Rover and a black Peugeot were involved in the incident on Wednesday last week at the junction of Stoke Row Road and Gallowstree Road.

Firefighters from West Street in Henley and Caversham Road in Reading attended the incident which was the second to happen within a month.

No one was injured but the road was closed for a number of hours by Thames Valley Police so the vehicles could be safely removed.

The Range Rover was left on its ride side with the windscreen damaged and the bonnet of the Peugeot was smashed in and dented.

The crash was the latest in a series to happen at the junction which has previously prompted residents and parish councillors to call for action.

Last month on Saturday, June 12, a Volvo XE90 was struck by a 4x4 at the same junction causing it to spin anti-clockwise 180 degrees. It was also pushed backwards about 20m along the road.

James Stone was driving with his sister two young sons at the time and said he was “so completely terrified” for his children’s lives.