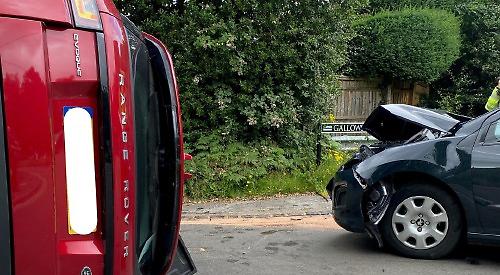 TWO cars were badly damaged after colliding at an accident blackspot in Peppard.

A red Range Rover and a black Peugeot were involved in the incident on Wednesday last week at the junction of Stoke Row Road and Gallowstree Road.

Firefighters from West Street in Henley and Caversham Road in Reading attended the incident which was the second to happen in six weeks.

No one was injured but the road was closed for a number of hours by Thames Valley Police so the vehicles could be safely removed.

The Range Rover rolled over on to the driver’s side with the windscreen damaged and the bonnet of the Peugeot was smashed in.

The crash was the latest in a series to happen at the junction which has previously prompted residents and parish councillors to call for safety measures to be introduced.

Last month, a Volvo XE90 was struck by a 4x4 at the same junction causing it to spin 180 degrees anti-clockwise. It was also pushed backwards about 20m along the road. The rear left-side wheel of the car had collapsed and the rear bumper was dented and scratched. The rearside passenger door was also damaged.

The front of the 4x4 was also smashed in but the driver and her passenger were not injured. James Stone was driving with his sister, Nicola Stone, and his two young sons, Lucas, six, and Oscar, one, at the time. Everyone but Oscar suffered from bruising and whiplash.

Joanne Askin, the clerk of Peppard Parish Council, said the accident blackspot is “very much on the council’s agenda” and they have been campaigning for more safety measures for five years.

There are already two red “Stop” signs either side of the Gallowstree Road junction and a white painted “STOP” on the road. The white lines on the road were repainted by Oxfordshire County Council, the highways authority, about three years ago.

Ms Askin said: “We’ve been trying to get something done because it has signage but there’s something about that junction that people are missing. The county council has repainted the lines but we’ve carried on campaigning. The accident six weeks ago helped because of their injuries and I sent photos of the accident last week which has prompted action.”

The county council, which is the highways authority, has now proposed repainting the lines again including the slow marking on Stoke Row Road and adding an additional slow marking on Gallowstree Road.

It is also considering adding further stop signs with red and white reflectors to make them stand out further but they are waiting to see if it is viable within its budget.

Ms Askin added: “Any improvement is good but we don’t know if it will be enough just yet.”

A spokesman for the county council said that after the first incident the council has been refurbishing and enhancing the line markings and also some more significant enhancement of the signing. A small amount of hedge growth has also been removed from around the existing stop signs.

He added: “The second incident involved a vehicle approaching from the Gallowstree Road to the ‘Give Way’ side of the crossroads and, while both the signs and lines enhancement already planned will go some way to enhance things from this approach, we are revisiting this so that, where possible, further emphasis can be given to this side of the junction.”