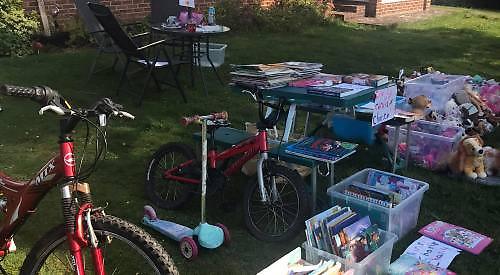 A GIRL from Sonning Common has raised money for the animal shelter that saved her dog.

Olivia Zyda, eight, made £58.60 by selling her old toys, books and teddies outside her home in Wood Lane.

The money was donated to Friends of Gonyeli Shelter, a dog rescue centre in Cyprus, where Olivia and her mother Shelley adopted their golden-
collie cross Lloyd.

The dog, who is now one-year-old, and his seven siblings were found abandoned in a cardboard box before being cared for at the centre.

Ms Zyda, 49, and Olivia adopted him when he was five months old and say he is a “lovely, nice boy”.

“Olivia had always wanted a dog,” said Ms Zyda. “My brother has one and she spent a lot of time looking after it and playing with it but I didn’t want to adopt one until she was a bit older.

“At the time we decided to get one we went into lockdown and when things were opening up again there just weren’t any rescue dogs in the UK. I had a friend who adopted a dog from abroad so I started having a look and followed this shelter and they had these eight puppies so I messaged straight away and we were lucky enough to get one.

“We had to wait for them to get older and be vaccinated and then for them to be flown out. The charity does so much to rescue animals and raises them in such a nice way so they are lovely. Olivia loves Lloyd — she’s an only child so it’s like he’s her younger brother.”

Ms Zyda, a resource manager, said when Lloyd turned one in August it made her realise how many toys and books her daughter owned.

“I thought, ‘Oh my goodness’,” she said. “I have eight years of her teddy bears and books and there’s more coming in and less going out.

“We then saw some people trying to raise money for the dog shelter online and that’s how the idea to sell Olivia’s things came around. It was then a matter of days to organise it. We just dragged everything out on a Saturday morning and Olivia made signs.”  Olivia painted a colourful sign saying “charity” with a drawing of Lloyd underneath which she displayed with her books and toys.

Ms Zyda said: “A third of her things had to go back inside as Olivia got upset and said she couldn’t do it but she stuck out the stuff she was happy to part with.

“We did jolly well. I put up a table and made a day of it and it became a bit of a sociable occasion as well.

“Olivia was really chuffed and when we read the comments online saying what a kind girl she was, I think she realised, ‘Yeah, I’ve done something good’.”

Irene Scott, who volunteers at the shelter, said: “Thank you so much, Olivia. What a wonderful thing to do for the doggies, you are amazing. I am so happy that you love Lloyd so much. I wish a loving home just like yours for all the dogs and puppies.”

Ms Zyda and Olivia hope to hold more fundraisers for the shelter, including a walk or run where they can take Lloyd.  “We just want to give back to them,” she said.

To support the charity, visit https://gonyelishelter.com