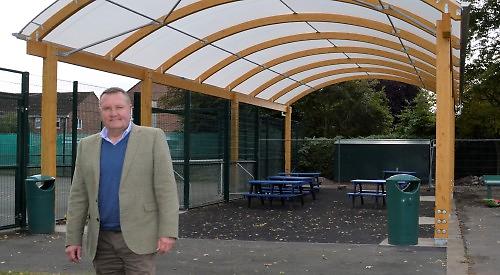 A NEW canopy has been erected at Sonning Common Primary School to allow outdoor learning, play and performances.

The parent-teacher association spent seven years raising the money for the £55,000 wood and steel-framed structure with a curved fabric roof.

It has been built next to the multi-use games area, which was installed in 2014, and is 18m long and 8m wide.

It has already been used for teaching, drama sessions, physical education and one performance while the children can use it as a shelter at playtimes.

Christ Hirst, headteacher at the Grove Road school, said: “When the games area was built it didn’t look finished. The area next to it was just grass so the intention was to put down a play surface but we didn’t have enough money at the time.”

Mr Hirst said: “We’ve had kind donations since then and in November last year we decided we could do it as the PTA said it had enough funds.”

The canopy was built by Fordingbridge, a specialist company in Arundel, West Sussex.

“It is amazing,” said Mr Hirst. “It only took a couple of days to put up and was completed just before the children came back from summer holidays.

“They absolutely love it. I like the children to feel that they don’t have to stay inside the classroom to learn when they can learn everywhere.

“When you have something built you want it to last for 25 years. I want the next headteacher to be just as proud in 25 years’ time. You don’t always have to go for second best.”

Mr Hirst, who has been headteacher since 2009, said he hoped to deliver other improvements, including a smaller canopy near the foundation area and a 1m wide path around the school field.

He said: “The path is so if children want to do their daily mile or half mile when it has been raining they can still get outside to exercise — it’s about health and mental health.” Mr Hirst thanked the association and the community for making the canopy possible.

“They have been amazing and I thank them so much for all their support throughout covid and afterwards,” he said.

“I would also like to say a big thank-you to Andy Parry, who was our site manager during the summer overseeing the installation of the canopy, Fordingbridge and Dave Tyler, of DGT Builders, who gave sound advice based on years of experience and expertly put the foundations in.

“My message to the association and the wider community is just because your dreams have come true it doesn’t mean to say that you stop dreaming.”