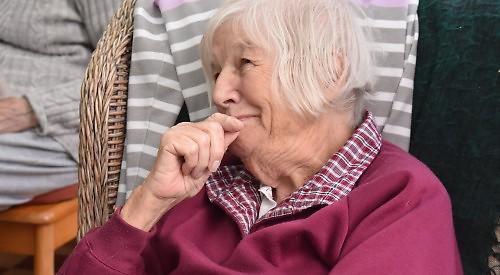 A WOMAN from Sonning Common was welcomed home from hospital by an impromptu concert by a singing group.

Barbara Winnington, 86, was visiting relatives in Chichester in West Sussex with her husband Bernard, 96, when she fell and broke her hip.

She spent three weeks in hospital there and had emergency surgery before being transferred to Didcot Community Hospital.

When Mrs Winnington returned to her home in Grove Road, the Harmony singing group, of which she and her husband are members, decided to visit her and perform.

Eight members of the group gathered in the Winningtons’ conservatory and sang Consider Yourself from Oliver!, Edelweiss from The Sound of Music and I’d Like to Teach the World to Sing by the New Seekers.

Mrs Winnington, a former nurse who has lived in the village for 50 years, said: “I’m very touched and honoured and I want to thank everyone for coming. I’m home now and it’s absolutely lovely to be here. The amount of love and affection you feel from the community is very moving.

“What a lovely name Harmony is — it certainly sums up what the group is about. I get tired very easily but I hope to be back singing with them soon.”

Recalling her fall, Mrs Winnington said: “One moment I was upright and the next moment my balance was not right and I fell.

“Two couples stopped to help Bernard and me and they called the ambulance.

“The pain I felt was indescribable but at the hospital I knew what to expect as I worked for the NHS for many years, so I wasn’t worried.”

Mrs Winnington was working as a nurse when she was medically retired after breaking both legs while walking in the Pyrenees in 1994. After that she worked for the Fish volunteer centre in Sonning Common. She said: “I travelled a lot over the years and hope I’ll be able to do that again soon. I have a great enjoyment of life and I think that is very important.”

“She and Bernard are very independent but I think sometimes they could use a bit of help. We try to look after each other at the singing group.”

Mr Winnington said: “It was a lovely thing for the group to do and we are very pleased.”

The Winningtons were married in 2017 at All Saints’ Church in Peppard in a service conducted by Rev James Stickings.

After the service, which was attended by 80 people, they rode on a trailer pulled by a 1962 McCormick International B414 tractor to their reception at Peppard War Memorial Hall in Gallowstree Road.

The tractor, which Mr Winnington restored, is now parked on their driveway and he regularly takes it to local fairs and shows.

The couple had known each other for a number of years as they both sang in community singing group Nottakwire.

Mrs Winnington said: “I often think what a good job we didn’t miss each other. We have been married four years and four months and we are so happy.

“Our wedding day was so lovely, there were so many people and it was very special.”

Harmony, which was formed after Nottakwire was disbanded in November last year, is now run by a committee of 15 members.