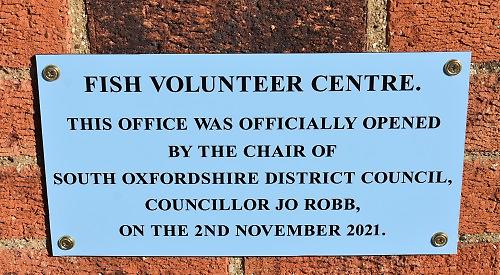 A CHARITY that provides transport and support to elderly and disabled residents has celebrated moving to new headquarters.

The Fish volunteer centre, which was founded in 1979, has relocated from Kennylands Road, Sonning Common, to the old police station in Lea Road.

The £150,000 move was paid for with a donation from the Mulberry Trust, a grant from South Oxfordshire District Council, money from the charity’s reserves and a “buy a brick” appeal.

Councillor Jo Robb, who chairs the district council, attended the official ceremony on Tuesday last week together with trustees and volunteers.

The move was completed in February and the new centre has been in use since then.

Fish, which stands for Friendship In Sickness and Health, used to be based in part of the home of former village GP Dr Peter Hemphill, who died earlier this year.

Clive Mills, former chairman of Fish, who oversaw the move, said: “We were in Kennylands Road and renting that office. We started this project two years ago and began fund-
raising but then covid came along, so the buy a brick campaign took a bit of a knock.

“We wrote lots of letters and appealed to lots of people and we managed to raise the £150,000.

“A number of individuals made substantial donations.

“A lot of people refer to Fish as the organisation that keeps the community viable because without it some people would never get out.

“When I was chairman, I had two main goals. One was to bring the office into the 21st century and with the help of our great volunteers we have done that.

“The other was to find a permanent home but the opportunity didn’t come up.”

The former police station was closed by Thames Valley Police in 2017 as a cost-cutting measure.

The building was put up for sale two years ago and Fish put in an offer to buy it but was unsuccessful. Mr Mills then approached XP Property, which bought the site, and it agreed to sell the building to Fish.

Newgate Developments and Jack Jiggens of XP Property started work on site in October last year, first gutting the interior and then building a new rear wall and replacing the roof.

The other properties on the site, including the old police house and two garages, have been converted into homes.

A board in the reception area has 150 names of all the people and organisations that contributed.

Fish chairman Richard McQuillan said: “I can’t make a speech without thanking all the volunteers that have worked so hard over the last two years. This is our wonderful new office, paid for by generous donations from the public.

“It was kickstarted by a big amount of money from the district council, which improved our confidence that we could crack on and secure an office owned by the charity that we wouldn’t have to rent.”

He added: “We are very busy at the moment, so new volunteers would be great. We are getting 10 to 12 jobs a day.”

Cllr Robb said: “This is testament to the dedication of Fish and the volunteers.

“We have realised over the course of the last 18 months how important these community-based volunteer organisations are.

“Fish provides a lifeline to many people. You provide support for 450 people and that could be shopping or pharmacy trips but, almost more importantly, the friendship that has been so important recently.

“It is a great pleasure to be here and wonderful to see that the district council’s money is going towards something that will benefit the community.”

Fish has 40 active drivers and another 12 that drive its minibus, which has a wheelchair lift.

The charity continued some of its services throughout the pandemic, such as taking people to the shops, the doctor and hospital or picking up and delivering prescriptions and shopping for people who were vulnerable or shielding.