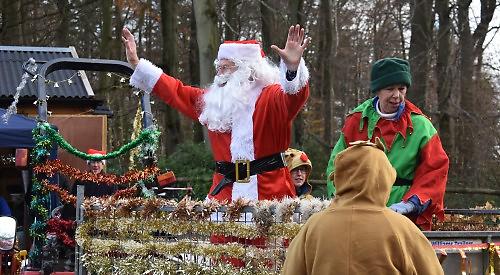 A charity which provides horse-riding facilities for disabled people has raised more than £2,000 for a new pony. Wyfold Riding for the Disabled, which is based at Wyfold Court, hosted a Christmas fair which raised £2,250.

About 100 people attended the event, where volunteers helped run stalls selling second-hand goods. There was also a raffle for a hamper and hot dogs, soup and hot drinks for sale. Father Christmas arrived in his sleigh, which was pulled by the charity’s volunteers dressed as reindeer.

Vicky Thornley, a former showjumper and British rower who retired earlier this year, officially opened the event. She said: “I have been involved with the charity since about 2016 but obviously my training hasn’t allowed me to come here as much as I’d like to but the last few months I have been with the Tuesday team here and I’ve seen first hand what a difference it makes — it’s lovely. Before rowing, my passion was horses so it’s nice to come back and be around horses again but it’s also lovely to see how much the riders get out of spending time with the horses — it’s just a lovely place to be with a great team of volunteers.”

Gill Rushworth, the charity’s fundraising co-ordinator, said the event was a huge success. She said: “We had a great turnout and we’re very pleased with the amount raised. We try to do this event every year but it was cancelled last year due to covid and the year before we were iced in and had to cancel it. It was really nice to put it on again and to see the yard full of people.”

The charity helps people with physical or mental disabilities from South Oxfordshire and Reading to ride ponies as therapy. It usually has seven or eight ponies but recently had to retire two due to them being diagnosed with arthritis so is looking for replacements. If you can help, call the charity on (01491) 680541 or email info@wyfoldrda.org.uk