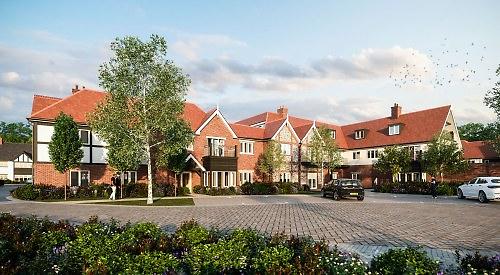 PARISH councillors are demanding that millions of pounds are spent on affordable housing in Sonning Common.

It comes after the failure of a community campaign to prevent a large retirement complex being built in the village.

Inspired Villages was granted planning permission for 133 “assisted living” flats on a field off Blounts Court Road, known as Little Sparrows, on appeal.

The company agreed to give South Oxfordshire District Council, the planning authority which had refused consent, £7.5million towards affordable housing if it was successful.

Now Sonning Common Parish Council wants all this money to be spent in the village.

The parish council first recommended refusal of the proposal in 2019 due to the impact on the Chilterns Area of Outstanding Natural Beauty and as it was contrary to the village’s neighbourhood development plan.

Chairman Michael Cann said he felt “incredibly let down” after the district council twice tried and failed to challenge in the High Court the decision made by planning inspector Harold Stephens before conceding defeat. Speaking at a parish council meeting, he said: “I feel strongly about this because the village I moved into 16 years ago has had control taken away from the residents.

“I feel the residents and the parish council have been let down and the neighbourhood development plan committee has been let down.

“One member emailed me to say he had spent nine years of his retirement dedicated to it and this is what he gets.

“I feel let down by South Oxfordshire District Council for not standing up for the challenge. I feel let down by district councillors who could not see through the situation in which Sonning Common found itself.

“I feel incredibly let down by the inspector, who did not consider the AONB as something arbitrary.

“I feel let down by a system that is urbanising our village.

“I’m incredibly let down by a judgement that is not good for our local environment — it’s an absolute tragedy. There’s an amount of money on the table for affordable homes out of all this, though, and we have to demand that 100 per cent of that is directed back into this village to make sure we have affordable housing in this community as a tiny bit of payback for the pain we had to take.

“We need to enable people in younger generations to get their foot on the housing ladder as Sonning Common has a real gap. The money would help younger people who live in the village to stay.

“We have to demand of South Oxfordshire District Council that any money coming from Inspired Villages is used 100 per cent for the benefit of this community.”

Councillor Carole Lewis said: “It’s so frustrating — we’ve done so much work on the neighbourhood plan and it has been thrown back in our faces.”

Councillor Diana Pearman said: “We’re now absolutely tied to having this development that we never wanted. It takes away preferred locations and it affects the AONB.

“We have no other tool to argue against anything that happens in the future. We’re open to developers.”

Councillor Leigh Rawlins, who represents the village on the district council, said many other councils were concerned about the decision by the inspector, who said that Little Sparrows was not in a particularly attractive part of the AONB.

Cllr Rawlins said: “The harm that has done to the neighbourhood plan, all the work that went into that, the work to make it sustainable and reflecting things that are important for us.

“The idea we can have this high-rise development at the top of the AONB and the inspector can say, ‘I see nothing special here,’ is absolutely unbelievable.”

Councillor John Stoves said: “We are stuck with it and there’s a limit to what we can do.

“I’m sure that as things progress we’ll think of things but in the short term we should try to get a weight limit on Widmore Lane as it’ll be the easier route for them once development starts.”

In its appeal, Inspired Villages said it would contribute £7.5million towards affordable housing in lieu of on-site provision.

“The planning authority is free to spend the money as it sees fit in delivering affordable housing.”