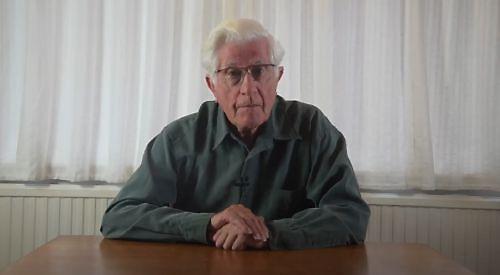 AN elderly man’s police record for committing an alleged non-hate “crime” has been expunged.

Douglas Kedge, of Lea Road, Sonning Common, asked police to clear his name after the Court of Appeal ruled that such a practice was an unlawful interference with freedom of expression.

The 85-year-old was reported to the police by a woman in Northumberland whom he wrote to as he disagreed with a letter she wrote to The Times.

He was then telephoned by a police officer and told the woman had complained that his letter amounted to a hate crime.

Now Thames Valley Police have told Mr Kedge that they will remove the words “hate crime” from the record of the complaint and change his status from “suspect” to “mentioned”.

The retired teacher said he was “reasonably happy” with this response but still wanted all police forces to expunge records that were clearly not hate crimes.

The issue began in November 2020 after the newspaper published an article about a storyline in the ITV soap Emmerdale in which two characters decide to terminate a pregnancy after discovering the child could have Down’s syndrome.

The woman responded with a letter saying that the episode was a deliberate attempt to perpetuate prejudice against Down’s children.

Mr Kedge said he wrote to her at her home as he considered her views to be “nonsense”. He said: “I found her address online and politely said that her comment was out of order and it was most offensive to the producers of Emmerdale.

“The next thing I know I had a call from the police. She had said to them she had found the letter threatening and was uncomfortable with the fact I found her address.”

Mr Kedge said the officer who called him assured him the force believed no criminal offence had occurred but asked for his date of birth as the incident had to be placed on public record.

The College of Policing, which issues guidance to police dealing with hate crimes under the Public Order Act 1986, states: “Where it is established that a criminal offence has not taken place, but the victim or any other person perceives that the incident was motivated wholly or partially by hostility, it should be recorded and flagged as a non-crime hate incident.”

In January, Mr Kedge wrote to Thames Valley Chief Constable John Campbell following the Court of Appeal’s decision in the case of Harry Miller in December.

Mr Miller, a former police officer from Lincolnshire, was visited by police in January 2020 after a complaint over alleged transphobic tweets he made. This was then recorded as a non-crime hate incident.

The court ruled that the College of Policing guidance had been wrongly used and it had a “chilling effect” on Mr Miller’s freedom of speech.

Thames Valley Police, replied to Mr Kedge saying: “We have now had the time to consider the request and have determined that the following changes have been made to the occurrence, which we hope addresses your concerns.

“We believe these changes balance Thames Valley Police’s need to preserve information to outline the steps taking in respect of a specific occurrence and your concerns about the nature and context of the information held.”

He said: “I understand that different forces are reacting in different ways to the judgement.

“What I’m hoping for now is that the Home Office and College of Policing will push all forces to expunge these sorts of records that are clearly not hate crimes.

“Thames Valley Police have gone three-quarters of the way and have certainly been helpful but I think the whole system could go further and something needs to be done about the College of Policing.

“I hope they will come to their senses and authorise other forces to totally expunge all non-hate crime incidents, especially ones that are as ridiculous as mine.”

Mr Kedge had said previously that the court judgement “went a significant way in countering the current cult of self-determined
victimhood”.

He said: “This is not only about myself. Over the past five years around 120,000 people have had non-crime hate incident records raised against them by the police. They have all been regarded as ‘suspects’.”

Mr Kedge said it was “dangerous madness” that the recording of non-hate crimes had become an accepted part of the criminal system.

“It is only a step away from what might be expected in an undemocratic, repressive regime,” he said.

“Who is responsible for this disturbing and deeply troubling situation, the violation of lawful free expression? Will they be named and held accountable? They certainly need to be.”