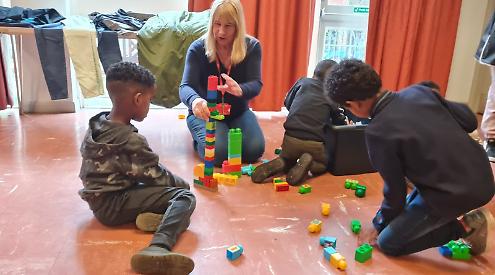 A WOMAN from Peppard Common dropped off more than 200 chocolate eggs to refugee children for Easter.

Barbara Grimm, who volunteers for the charity Care4Calais, spent a week delivering the eggs, which had been donated by a supermarket that asked not to be named.

Mrs Grimm, who is retired and lives with her partner, approached supermarkets across South Oxfordshire and Berkshire asking for donations, eventually receiving more than 90 Easter eggs. The rest of the eggs were made up by individual donations.

She said: “The parents have no right to work while they are in the process of claiming asylum, so they don’t have the money to buy treats for their children.

“Their kids are all in local schools and will have been learning about Easter eggs and Easter egg hunts over the last week, which could have been really hard for them. A lot of the children haven’t had any treats since they came to this country.

“They were so overjoyed to receive these gifts. The eggs were personalised, and so it was lovely to see them searching for one with their name on it.

“These families all had their own lives, homes and jobs before they were forced to flee their countries, and doing something like this, no matter how small, is just a reminder of that to them. Show me a child who isn’t happy to get an Easter egg.”

Mrs Grimm has been volunteering for Care4Calais for the last six months. The charity helps to settle refugees fleeing from war-torn countries like Afghanistan, Syria, and more recently Ukraine, into their local communities.

Her role is in family support, which includes registering children at local schools and helping them with school uniform.

The charity supports a network of around 1,000 refugees in the area, including more than 200 children.

Mrs Grimm and other volunteers also gave presents to refugees at Christmas and often do the same for birthdays.

She said: “The parents love their kids so much and are so proud of them. They will often send me pictures of them in their school uniforms over WhatsApp. They are so grateful whenever their children receive gifts.

“We are always in need of more volunteers. There are many ways to help, such as providing admin support, collection and distribution.”

Meanwhile, the charity needs donations of new underwear for men, women and children. They can be dropped off at Jonkers Rare Books in Hart Street, Henley.