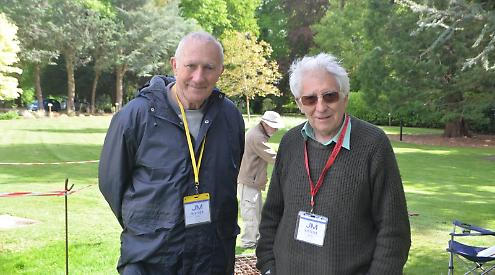 PARTS of a Roman wall and another wall from the 1400s were found by archaeologists during a dig in Sonning Common.

Members of the Berkshire Archaeological Society were at the Johnson Matthey Research Centre in Blounts Court Road for the ninth year running.

The 15th century wall had foundations made from mortared flint lumps which suggest it was built as a single activity. Evidence of a layer of chalk lumps was also found, which pre-dates the wall.

A 20th century garden was also found with a cable running through it that used to supply electricity to the fountain in the pond off Blounts Court when it was a farm. A Victorian gateway led to the garden and there was a cut made in the 15th century wall to accommodate the turn of the gate.

The archaeologists also found a sinkhole, which is thought to have led to the wall being abandoned.

They spent almost three weeks at the dig, which ended on Friday.

Society chairman and lead researcher Andrew Hutt, 75, said: “Understanding what’s beneath us is so exciting. It gives people a sense of place when they know what they’re standing on. We have to explain to people why it’s important.”

Keith Abbot, 53, who has been a society member for three years, said: “Everything we find is a window on the past that you can’t learn from books and movies.

“You even find their dinner [oyster shells] and you can start to imagine how they lived. It makes you see that we don’t really own land, we’re just the guardians of it.”

The idea to explore the site came from Nigel Spencer, who retired from the Johnson Matthey Centre in 2013 and joined the society.

The society, which celebrated its 150th anniversary last year, holds events all year round, including public lectures, site visits, field projects and research. Many members also have individual projects and the society helps them with equipment and extra hands.