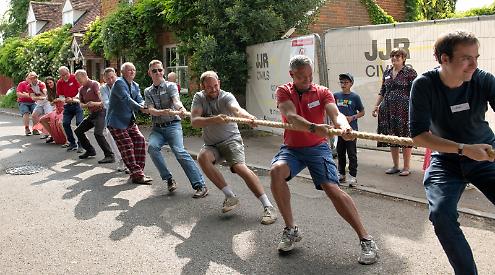 RESIDENTS of Sedgewell Road, Sonning Common, decorated their wheelie-bins and raced them along the road at their jubilee party on Saturday.

More than 80 people attended the event, where there was food and drinks and a barbecue as well as games such as “toss the egg” and tug of war.

Zoe de la Pascua and some of her neighbours got together for some Prosecco in March and decided to put together a jubilee event.

Mrs de la Pascua said: “I think it was a wonderful opportunity to bring the street together to celebrate this historic occasion. It was a lovely chance to get to meet people that you don’t ordinarily meet on a day-to-day.”

Mrs de la Pascua said she was lucky to have such helpful and entertaining neighbours.