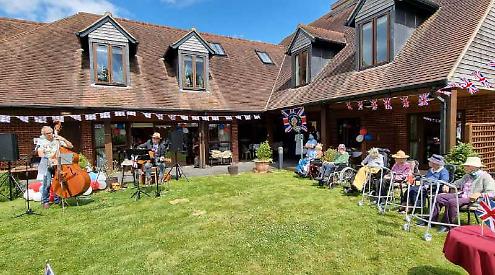 A CARE home in Sonning Common had a day of entertainment for the jubilee.

A tree was planted at the Abbeycrest Nursing Home as part of the Queen’s Green Canopy initiative.

This was followed by an outdoor tea party for the 60 residents and about 20 carers and nursing staff.

A band called 2Tanium played hits from the Sixties, Seventies and Eighties and everyone sang along.

The garden was decorated with bunting and Union flags and a cardboard cut-out of the Queen joined the party.

George King, customer relations advisor, said: “It was really important because the Queen is such an integral part of society.

“I’m really happy with how it went and everyone spent the whole weekend enjoying themselves.”