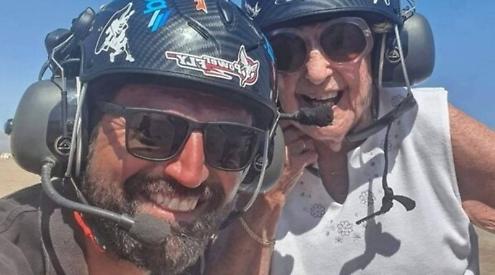 A 94-YEAR-OLD woman went paragliding while on holiday with her family in Crete.

Jean China, of Ashford Avenue, Sonning Common, was with her daughter Diane Robson and son-in-law Gary, who own a home on the Greek island, and Mr Robson’s mother Giacinta.

It was when they were there for a holiday last summer that Mrs China first suggested paragliding but there was no time to arrange it then.

Mrs Robson, 65, from Caversham, said: “It was a bit out of the blue. She has always been quite spontaneous and full of life but I didn’t think she would do anything like this.

“My daughters thought it was wonderful. They asked her, ‘Really grandma, are you really serious?’ but then they were very encouraging and told her to go for it.” Mrs China was strapped into the paraglider piloted by Giorgos Kissanakis as they flew over the island and sea and she smiled throughout.

Afterwards, she received a certificate and then enjoyed a celebratory drink with her family.

Mr Kissanakis’s previous oldest passenger was a 90-year-old German so when word got out about Mrs China’s achievement, it made the local newspapers and television. During the rest of the two-week trip she enjoyed going to the beach, eating ice cream from the beach bar and swimming.

Mrs China grew up in Blaydon, near Newcastle, and moved to London in her late teens to join the Women’s Royal Naval Service after finishing secretarial college.

She met her late husband, Louis, at the Stage Door Canteen in Piccadilly, which was a club for the forces.

They were married in 1951 and moved to Ashford Avenue six years later, when the house was new. Mr China passed away in 2018.

Mrs China, who swims at The Club at Mapledurham, loves travelling.

When she couldn’t do that during the coronavirus pandemic, she wrote a book about her life in only three weeks but it has still to be published.