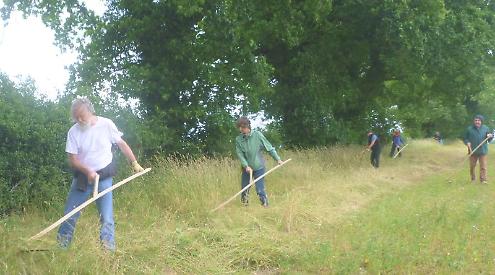 A WILD FLOWER meadow has been created near Gallowstree Common for residents to enjoy.

Clive Leeke, an agricultural contractor, and his wife Veronica, from Emmer Green, are responsible for the natural attraction in a field off Horsepond Road.

They rent the land off the Eye & Dunsden Poor’s Land Charity, which also owns the adjoining paddock and Sonning Common Parish Council allotments.

Mr Leeke, who runs Hedgecraft in Kidmore End offering countryside skills courses, took over the tenancy of the field in November 2020 in order to improve the biodiversity.

He has used the land to graze sheep and in April planted 65 types of wildflower along the footpath that runs through one end of the field. The project was funded by the Trust for Oxfordshire’s Environment.

Mr Leeke said: “It’s quite difficult to carry out sheep grazing with a footpath there, so we dedicated it to the residents of Sonning Common.

“The land was really depleted so when I saw it was up for tenancy, it was an opportunity I couldn’t resist.

“I’m a contractor and consultant for other people’s farms but I never got the chance to have my own.

“I feel it’s mine even though we don’t own it as we get to make all the decisions. We won’t make any money from it but it’s worth it — it’s a passion of mine.”

The grassland was sown with herbs which encouraged the sheep to graze, helping to enrich the soil.

Mr Leeke said the nutrients in the herbs were medicinal for the sheep, meaning they didn’t need treatment such as wormers.

“It’s good for animal and soil health,” he said. “And now there’s skylarks and butterflies when there weren’t any before.”

Mr Leeke’s business is based in the Old Farmyard in Kidmore End. He started it in 1988 after spending his formative years as an agricultural contractor, grubbing out hedges and filling in ditches and ponds before realising that this practice was not sustainable. He had always had an interest in rural crafts, so began to seek out the old craftsmen who could still lay hedges, make hurdles and puddle clay ponds in the traditional ways.

Now he trains dozens of students each year in these long-forgotten skills.

Last month, he held a scything course for seven students at the field to teach them how to manage the new meadow.

He taught them a traditional Austrian form of scything which is done once a year to allow the wildflowers to continue producing seeds and regenerate.

Another course will be held on August 6. For more information, visit www.theoldfarmyard.co.uk