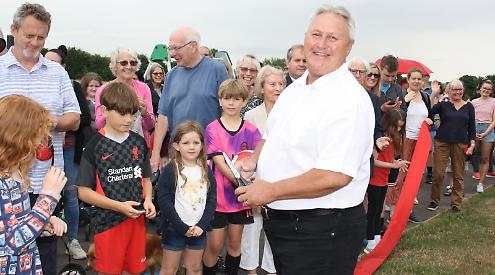 THE Memorial Park recreation ground in Sonning Common has been officially opened.

Dozens of children and their parents attended the ribbon-cutting ceremony last Friday before trying out the new multi-use games area and playground.

Parish councillor Diana Pearman, who led the £730,000 project, said: “It has taken a lot of hard work and it has been very challenging but we finally get to say that Memorial Park is now open.

“We were desperate to have it ready for the summer holidays but I didn’t really believe it would be. We had an inspection just two days before opening and they thankfully gave us a quick yes.

“The cycle racks were already full on opening day which is great because we want to encourage walking and cycling to come here. The park is all about health and activity.”

Cllr Pearman cut the ribbon to the park then another was cut outside the play area by Kevin Browne, the quarry manager of Tarmac in Sonning, which gave a £100,000 donation for it to be built.

Mr Browne said: “With schools just closing for the summer holidays, the children will have these great grounds to use. I wish I had something like this when I was their age. As a business, we’re very pleased to be able to support the local community.”

Children ran around the play area using every piece of equipment such as a large play tractor, roundabout and a “cliff rider” which has a pole vault to get from one platform to another.

Tom Griffiths, from Kompan, which built the play area, set up a table with ice cream cones for the children along with drawstring bags filled with goodies and a company water bottle. He also brought a speaker to play music and set up bubble machines.

He said: “I’m very proud of the final result and what we delivered. We think playgrounds should be places for birthday parties – places for communities, children and families to want to go to. This is why we do what we do. It’s a great honour to do this kind of work.”

The parish council also provided tickets for everyone to get a free ice cream from the Lucky Clover Leaf Ices van.

The rest of the 10 acres offers a multi-use games area with high quality polymeric and tarmac surfaces, a 3m perimeter trackway for cycling, running and walking, a 100m sprint straight, level playing areas for large games and recreational space for residents to enjoy.

In the games area, there are basketball nets and floor markings for basketball, football, netball and tennis and one section is locked to be rented for activities through the parish council website.

Money is now being raised for lights to be installed around it.

The Memorial Park plans were born from the 2016 neighbourhood development plan adopted by the South Oxfordshire District Council, the planning authority. In this it was identified to be missing key features to make it a traditional village, such as a park.

Developer Linden Homes also contributed £250,000 to help pay for levelling, drainage and seeding as well as £16,000 towards fencing.

This was in exchange for support for its application for 50 new homes which have since been built in the adjacent field known as Sonning Grove. The developer sold the land to the council for a nominal fee of £1 in return.

The rest of the funding for the project also came from developer contributions.