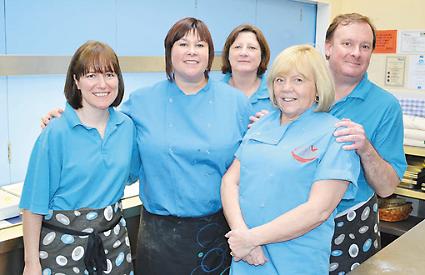 A WOMAN is retiring after serving in the kitchen at Sonning Common Primary School for 38 years.

“I’ve enjoyed it,” she said. “It feels like I have turned round and the time has gone. It’s a lovely school to work for. It’s beautiful, in good surroundings and we always seem to have nice staff.”

Mrs Wise, who lives in Baskerville Road with her husband Malcolm, a landscape gardener, was a pupil at the school, as were her two children and four of her six grandchildren.She has worked under six headmasters and witnessed changes to the buildings and the menus. There were originally two kitchens and now there is only one.

One of the biggest changes was when Kites Kitchen took over the catering from Oxfordshire County Council two years ago.