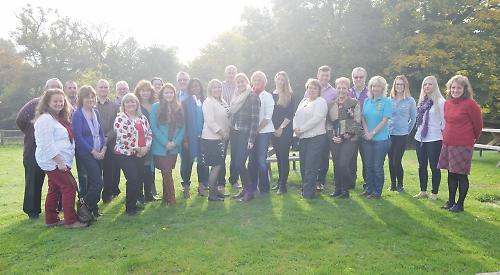 A NETWORKING group for small businesses has marked its third anniversary.

The group meets every six weeks at the Butcher’s Arms pub in Blounts Court Road for members to network and learn new skills. Guests at Monday’s meeting were served tea, coffee and pastries courtesy of Brakspear, which owns the pub.

The business collaboration was set up by photographer Kathryn Fell, of Churchill Crescent, Sonning Common.

More than 150 people have attended meetings and about 100 are registered members. Meetings usually attract 20 people.

Speakers have covered topics including social media, financial management and pensions. Mrs Fell, 40, said: “The group is more active and effective now as we reach out to a broader range of industries and services.

“There have been some positive collaborations between members of the group. For example, I ran a ‘headshot Tuesday’ where one of the make-up artists did the make-up and I took the photographs.

“I would like to see the group continue to grow the way it has and I want there to be more collaborations. This can help improve people’s confidence too. I used to hate public speaking and now I don’t give it a second thought. I see that in other people when they come here.”

The group is given free use of the pub for meetings by landlords Rob and Ellie Blues, who open early specially.

The next meeting will be on December 5 from 10.30am to noon. The guest speaker has yet to be confirmed.