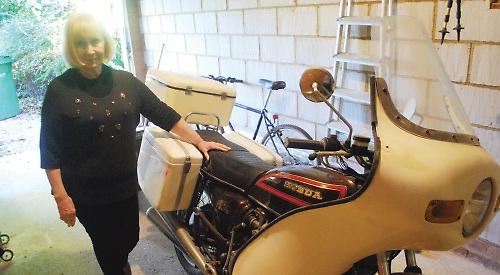 A WOMAN is raising money for the hospital which cared for her husband before he died.

Anne Daniels, of Kennylands Road, Sonning Common, hopes to collect £7,000 by March 5, which will be exactly a year since her husband Arthur passed away.

She has already raised £4,100 by selling items including a lawn mower and some golf clubs and hopes that Mr Daniels’ old Honda 550 motorcycle will make another £1,700.

Mrs Daniels, 75, wants to fund a sensory unit at the Royal Berkshire Hospital in Reading, where her husband died after a long battle with vascular dementia.

The unit helps reduce hallucinations suffered by people with Alzheimer’s, dementia and delirium through stimulating their visual and auditory senses. It would be part of the Woodley ward, where her husband was cared for in the weeks before his death.

Mrs Daniels said: “I’m desperate to raise the money. They have got one in the hospital but my husband was not able to use it.

“It means a lot to me that people want to donate. There will be a little plaque saying it is in his memory with all the major donors’ names on it.”

Mr Daniels and his wife were married in 1961 and moved to Sonning Common four years later. They have one son, Vaughan, now 48 and a surgeon working in Florida.

Mr Daniels was an engineer in the Royal Electrical and Mechanical Engineers, based at Christchurch, near Bournemouth. He went on work for Gardeners, Axel Johnson and Alfa Laval, helping to bring pharmaceutical products and foods to the mass market, included Crest toothpaste with coloured stripes and tinned custard.

He helped develop the Cadbury’s Creme Egg and worked out how to stop the yellow fondant blending with the white. Mr Daniels was an active member of Henley Golf Club and Henley Bowls Club, where he and his wife would volunteer behind the bar.

The couple were also members of the congregation at St Mary’s Church in Henley and then All Saints’ Church in Dunsden.

Mr Daniels, who retired in 2004, was diagnosed with dementia five years later and his wife became his carer and continued looking after him even when his symptoms were at their most severe.

Mrs Daniels, a retired musician, said: “The doctors said he should have gone into a home but I coped. It was hard but we were married for 55 years and it would have been 57 years on his 80th birthday last month. When you’ve been with someone so long you don’t put them in a home, you look after them to the best of your ability.”

The couple went to visit their son in America in January but two days after they had arrived Mr Daniels was admitted to the Fort Lauderdale Hospital suffering from a urinary infection.

A week later his wife flew him home on a medevac flight, which cost about £18,000. Mr Daniels was admitted to the Royal Berkshire Hospital on February 7, where he died from pneumonia almost a month later.

Mrs Daniels said: “I don’t regret bringing my husband back. I wanted him to be cared for by the NHS and the way the staff looked after him was amazing. It was better to come back because it meant I was not on my own at the hospital as I had been at a strange hospital in America and it meant friends and family could come and see Arthur.”

Her son flew home and spoke to Professor David Oliver, who had cared for her husband. “They talked about the unit and how it could have helped my husband greatly,” said Mrs Daniels. “They can’t ask for money but we picked up where he was coming from.”

She began fund-raising in May after setting up a charity called Sensory Unit, Woodley Ward RBH with herself and her cousin Keith Lomas as trustees. She sold her son’s MG car, which had been an 18th birthday present, for £2,500 and a scrambler motorbike for £270. She sold the lawn mower and golf clubs via the classified advertisements in the Henley Standard.

Now she is planning to sell another mower and a bicycle as well as Mr Daniels’ old motorbike. There have also been donations from friends and family.

Mrs Daniels said: “I miss Arthur terribly after so many years. You don’t realise how tired you are from looking after someone until you stop but I am trying to think about what I am doing.

“I’m sure that we will do it. I’m so grateful to my friends and family who have already supported us with donations. It would be impossible without their help.”