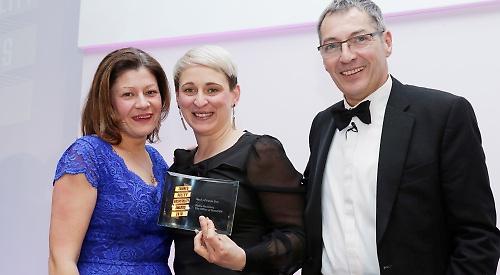 A COUPLE celebrated winning the title of Thames Valley restaurant of the year with all their staff.

Nick and Mary Galer, who have run the Miller of Mansfield in Goring for almost four years, were honoured at the inaugural Thames Valley Hospitality Awards on Sunday evening.

They were nominated in four categories so they decided to shut the High Street gastropub for the night and take all 11 full-time staff to the awards ceremony at the Hilton Hotel in Reading.

It was an extra special night for them as the business took silver in the independent hotel of the year category and housekeeper Nadia Bozikova won the “back-of-house star” award. Mr Galer said: “We were shortlisted in three categories so we were excited and when we managed to win a couple of them we were delighted. It’s great for the whole team to get that recognition.

“This winter has been really long and quite hard. We all put the hours in so it’s nice for that to be rewarded.” He believes the secret of the restaurant’s success is attention to detail.

“We spend a heck of a lot of the time preparing things,” said Mr Galer. “We make almost everything — there’s very few things that we buy in.”

He said Ms Bozikova, who joined the business six months after the couple took over, deserved her award.

Mr Galer said: “She’s very dedicated and does a great job. We’re very proud that she has been recognised in this way.”

Ms Bozikova’s duties include stocking linen in the bedrooms, highlighting maintenance issues, managing the deep cleaning programme and ensuring the heating is turned down and lights are switched off in rooms that are not being let.

Mr Galer said: “It’s people like housekeepers who are the unsung heroes of the business, yet it couldn’t operate without them.”

The Miller of Mansfield was also shortlisted for best front of house team at this year’s Top 50 Gastropubs Awards. It was named best newcomer at the 2016 Cateys and the Good Food Guide readers’ restaurant in the same year.

The Thames Valley independent hotel of the year award was won by the Great House in Sonning.

The previous 18-bedroom hotel, which is on the river, underwent a huge renovation to create another 31 bedrooms before it re-opened in April last year.

Sales and marketing manager Trudi Parr said: “We’re super-delighted. We’re so happy after all the effort and work that has gone into transforming the hotel — it’s really recognition of everything we have done.”

The French Horn restaurant, which is also on the river in Sonning, won silver in the best restaurant category while the Coppa Club, which is also in the village, was awarded bronze in the bar of the year category.

The loudest standing ovation of the evening was for the posthumous lifetime achievement award which went to Nino Bartolomei, of Nino’s Trattoria in Pangbourne, who died earlier this month. His family, including his son Nino Jnr, went on stage to collect the award from Sir John Madejski and the audience broke into spontaneous chanting of Nino’s name.

Mr Bartolomei was presented with his award before he died.

Awards organiser Marc Allridge, of Cherubs Floral Design, said: “We were delighted that so many establishments joined us to celebrate the very talented hospitality industry, which contributes massively to the economy of the Thames Valley and creates a huge number of jobs.

“It is important to celebrate the successes.”