At home with Amal Clooney 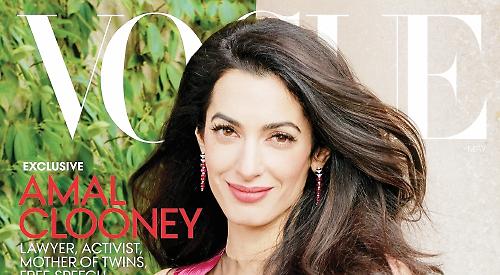 AMAL CLOONEY is enjoying life on the banks of the River Thames.

The human rights lawyer and wife of Hollywood star George says that Aberlash House in Sonning has allowed them to enjoy some privacy.

The couple bought the Grade II listed property for a reported
£10million in 2014, the year they were married, and spent their honeymoon there, living in unfurnished rooms.

They are already a familiar sight in the village where fellow residents include Prime Minister Theresa May and Led Zeppelin guitarist Jimmy Page.

The Clooneys are said to have spent many more millions on improvements to the house in readiness for the arrival of their twins, Alexander and Ella, who are now 10 months old.

In an interview with the May edition of American Vogue, Mrs Clooney reveals that the children had started to talk.

She says: “We’ve had some ‘Mamas’ and ‘Dadas’. George was very careful to ensure that ‘Mama’ was the first word.”

She also says that her husband affectionately calls the babies “the knuckleheads”.

The 56-year-old actor met his wife in 2013 at his home on Lake Como and they stayed in touch via email.

He corresponded in the voice of Einstein, his late cocker spaniel, who claimed to be trapped in various places and in need of legal rescue.

Mrs Clooney, who is 40, says: “It felt like the most natural thing in the world. Before that experience, I always hoped there could be love that was overwhelming and didn’t require any weighing or decision-making.

“It’s the one thing in life that I think is the biggest determinant of happiness and it’s the thing you have the least control over. Are you going to meet this person?

“I was 35 when I met him. It wasn’t obvious that it was going to happen for me.

“And I wasn’t willing or excited about the idea of getting married or having a family in the absence of that.”

Now they are settled in Sonning as a family, she doesn’t schedule any work calls before 8am as she is keen to spend time with her children in the mornings.

Mrs Clooney says: “We definitely do more things in our home to ensure privacy in a context where we can’t otherwise get it. But that whole side — invasions of privacy and paparazzi, all of that — has happened because of something so happy and so important in my life.”

The magazine describes how Aberlash House has all the trappings of a family home with framed black and white photographs of the celebrity couple and their friends.

A sitting room features family snaps of their respective parents, along with pictures of the couple shaking hands with Barack Obama and meeting the Pope.

A framed antique map of Berkshire adorns one of the walls of another room, along with a ship in a bottle, a gold monogram sculpture of the initials “G” and “A” and a host of photographs from their wedding in Venice.

Along with a well-stocked bookshelf, there are paintings of Einstein and the head of a giraffe, a creature which Mrs Clooney is said to adore.

However, it appears these works of art may have only sentimental value since insurance assessors gave the couple a low estimate of their value.

The couple divide their time between the house and their homes in Los Angeles and on Lake Como.

When they are in residence in Sonning, they are happy to be out and about. Staff at the French Horn restaurant recognise their friends and family and the couple enjoy shows at the Mill theatre, where Clooney meets the actors appearing in shows.

In the grounds of Aberlash House there is a garden room full of citrus trees as well as a pool and a pool house known, says Mrs Clooney, as the “the party zone”.

Inside is a bar, monogrammed robes and a photobooth that produces two copies of every picture — one for guests and another to go on a board.

The room occasionally doubles as a workspace, although the couple both have studies upstairs. Hers features her barrister’s wig on a stand by the window.

“You get it when you’re a really junior lawyer making no money,” says Mrs Clooney.

“You walk out having spent $1,000 on something that’s going to make you look really bad, especially if you’re a brunette.”

The house also has a 16-seat screening room, complete with sweet jars and a popcorn machine, where the actor carries out his editing.

There is also a cottage near the river with swing benches at the back.

Mrs Clooney was already a successful barrister, specialising in human rights and international law, when she met her husband.

Vogue reports that she has taken on many high-profile cases, including that of Nadia Murad, a 25-year-old Iraqi refugee, whom she invited to her home.

In August 2014, ISIS fighters appeared in Nadia’s home town of Kocho and six of her siblings were killed.

She and other women were transported to Mosul and distributed as sex slaves. She was beaten and raped repeatedly.

She was able to escape and make it to a refugee camp and later started a new life in Stuttgart through a German refugee programme and started telling her story.

In 2016, she met Mrs Clooney, who took on the Yazidis’ plight and interviewed other refugees and survivors, building a case that she could carry through the international courts.

Known for tackling the injustices faced by women, Mrs Clooney speaks in support of the #MeToo movement against sexual harassment and assault, not least in Hollywood.

She says: “I think because of the brave women who have come forward to tell their stories, the future workplace will be safer for my daughter than it was for people of my generation.

“We’re in a situation where a predator feels less safe and a professional woman feels more safe and that’s where we need to be.”