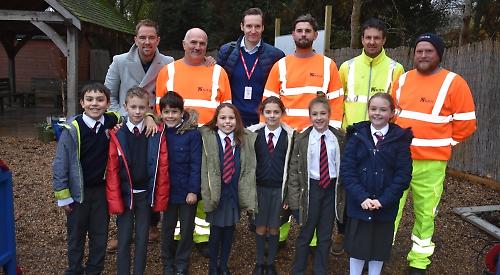 Mr Thomas cut a ribbon with his nine-year-old son Ethan, a pupil at the school, in front of other pupils, staff, parents and governors on Friday.

In February, an evening of music, dancing, eating and drinking to celebrate her life raised £2,000, which Mr Thomas suggested should be used to revamp the outdoor area by the playground. Parents donated more money.

The garden features flower beds and a covered area with seating and benches as well as games and educational tools.

A plaque in memory of Mrs Thomas reads: “A mum at this school who loved this place, loved this school and all it stands for. May this garden be a place that reflects her — loving, understanding and always compassionate.”

Mr Thomas, a former Sky Sports presenter who lives in Caversham, said: “I’m very touched by it. Gemma would have wanted something put back into the school and they wanted to refurbish this quiet garden.

“This school was, and has been, incredible. Ethan went back a week after his mum went. I could not have asked for a better place for him. There are other families in this school who are going through their own pain and heartbreak and this garden is as much for them as it is for Gemma.”

He said he had mixed feelings as the opening took place the day before the first anniversary of his wife’s death.

But he added: “I’m all for finding something positive out of something horrible which lifts the spirits and I think it’s great the kids will have this area.”

“The garden is wonderful and Gemma would have loved it. It brings tears to my eyes. It’s just a year ago we lost her and she was the glue that joined our family together.”

“The space has been completely transformed for a really special reason,” he said.

“We want this to be a space for children to have fun, relax and learn and learn to enjoy the beautiful surroundings we’re really fortunate to have at our school.”

Work to clear and overhaul the site was carried out by construction company the Kier Group over the summer with all materials and labour provided free of charge.

The school’s site controller Steve Andrews put in hours of work and parents helped cut back trees. The school council came up with ideas for the garden and the children helped choose the benches. Members of the gardening club planted more than 150 bulbs.

Parent Damiana Price, who helped organise February’s fund-raiser, said: “I think it’s wonderful that we can look at this every single day and think of Gemma.

“She was such a happy person. To see something positive come out of it is great.”

The Kier team, who were led by area manager Phillip Jaap and supervisor Dan Hawkes, worked with sub-contractors and school staff to complete more work. This included installing new fencing, remarking the playground, repairing the car park and installing steps on to the school field.

A school spokesman said: “The new fence is a vast improvement on the old section, which was only still standing by luck.

“The patching in the car park and playground is not only more aesthetically pleasing but also carries a safety benefit as it is no longer presenting a trip hazard.”

Mr Henderson said: “These upgrades were well overdue but unfortunately we didn’t have the funds to complete them independently. We are all extremely grateful to the team from Kier which not only completed all the work free but also to a very high standard.

“The children will be able to enjoy the improvements for the foreseeable future.”

A Kier spokesman said: “The playground transformation is awesome and something the children will enjoy.

“The lads on site had to get creative to decipher what some of the original markings were due to them being virtually worn to nothing. However, what they have produced looks really vibrant and should do so for many years.”

The school’s parent teacher association has previously raised more than £45,000 to build a new adventure playground and around half the total went on groundworks to prevent flooding.