Volunteers clear rubbish from the river and towpath 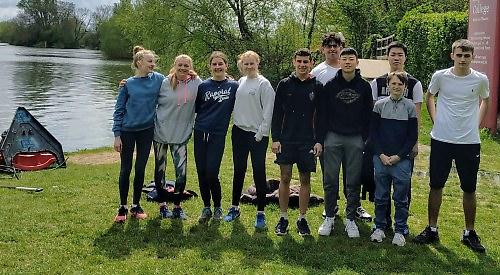 MORE than 50 people helped clear rubbish from the Thames towpath between Sonning and Shiplake.

Twenty-five adults and 30 children, including staff and pupils from Shiplake College, took part in the event, which was organised by the Shiplake Outloars rowing club for the fourth year running.

Some walked the path picking up litter while others were in boats and canoes provided by the college and Marlow Canoe Hire. Those on the water also helped to clear streams including the weir stream near the French Horn at Sonning.

The volunteers filled more than 20 bin bags with rubbish, mostly food wrappers, and a large number of glass bottles.

They also found a number of discarded hypodermic syringes and some collapsible road signs of the kind used during roadworks.

The volunteers were mostly from Shiplake, Sonning and Wargrave, although there was one visitor from London who has family living in the area.

Organiser Guy Fisher said: “The middle section of the path near the reeds was particularly bad and it was alarming to see how many hypodermic needles had been discarded.

“I get the sense that a lot of the rubbish was discarded in Reading and had floated downstream, although it’s hard to say for certain. Our efforts certainly improved the look of the area and made it a much nicer place for animals to live.

“I'm pleased to say this has grown every year. It’s meant to be a fun day and I think most people did enjoy themselves.

“They had the chance to be out on a beautiful part of the river while making a difference in their community.”