How horses can sort out our mental health issues 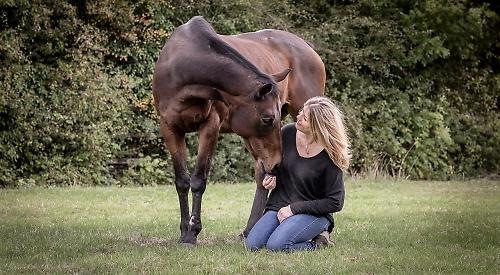 A FORMER teacher who retrained as a psychotherapist after losing her father is helping people overcome their mental health difficulties by introducing them to her horses.

Sally Hudson practises equine therapy, which she says can help you get in touch with your true feelings when conventional talking treatments haven’t helped.

The 50-year-old, from Sonning, holds 90-minute sessions at a paddock in Waltham St Lawrence, where her mares Pica, 20, and Stylish, 30, are stabled.

Clients first discuss their troubles with her before entering the paddock to interact with the horses, which can involve petting, grooming or walking alongside them.

They can visit at any time of year, although the warmer months are typically more popular.

Ms Hudson observes the clients’ interactions with the horses while chatting to them about their feelings.

Often the way they relate to the horses can reflect the difficulties they have faced with people and they feel free to express emotions which they have been bottling up.

Ms Hudson, who has owned and ridden horses recreationally since she was a child, said: “Horses are herd animals and therefore highly sensitive to relationships because their survival depends on understanding each other’s needs and looking after one another.

“When we walk into a field they’re naturally curious about us and without any judgement at all.

“They want us to feel safe because that makes them feel safe, so their presence naturally lowers our defences. It’s a very natural way of working.

“The horses can instinctively pick up on what’s going on with us and help regulate our emotions without us realising.

“It’s the same as being outside in nature — it’s where we were meant to be, hence why we feel better after going for a walk.

“It brings things up from deep within which the client can talk about with me and this links their problems to the more developed ‘human’ part of the brain.

“People often feel really judged by humans but horses don’t care what you look like, how you smell or how you’re dressed.

“You can just go in and be yourself, which is very helpful for people who’ve been traumatised in relationships with others.”

Ms Hudson was born in Holyport, near Maidenhead, and moved to Worcestershire when she was six. She trained as a personal assistant and worked in Australia and America, among other countries, before moving to Switzerland to teach English as a foreign language.

She returned to the UK in 2005 when her father Edward was diagnosed with terminal bone cancer and cared for him alongside her mother Jane, who now lives in Hampshire, until he died later that year.

Ms Hudson started seeing a psychotherapist in 2009 after becoming mired in grief and after six months she was finding it so useful that she began studying a diploma at the Centre for Counselling and Psychotherapy Education in London.

She qualified four years later and decided to pursue a master’s degree in the subject straight afterwards.

She finished this in 2014 by which time she was living in this area and had Stylish, a former polo horse from New Zealand, and another horse called Buster who has since died.

She researched and wrote her master’s dissertation on the benefits of equine therapy by working outside with clients alongside her regular therapy work, which she still practises from a London office and in Sonning.

In 2017 she bought Pica, another former polo horse, from Argentina, and also became a qualified practioner of mindfulness, a discipline which reduces stress by encouraging people to only pay attention to the present moment.

Ms Hudson said: “In my younger years I always felt like I was ‘in the wrong movie’ and thought finding my place in the world was all about the external search, so I did a lot of travelling and lived abroad for a long time.

“I was experiencing this intense grief after my father died and didn’t really know how to handle it or whether I would ever feel different again.

“I realised I needed support to work through it and thrive rather than just being stuck in ‘survival’ mode. The therapy taught me that life is about the internal search and I enjoyed the process of self-discovery so much that I decided to study it.”

Ms Hudson says one client, a teenage girl who was being homeschooled following a period of severe bullying, had a moment of revelation when Pica suddenly walked away to investigate a noise which had startled her.

She said: “As soon as Pica turned around, I could sense that this girl’s energy had plummeted so I asked what was happening.

“She told me, ‘I don’t like it when people turn away from me because I always feel like I’ve done something wrong’. It’s a great example of an interaction that allows us to unpick what’s going on.

“As she started to get her energy back, Pica returned and was calm because the noise wasn’t a threat so they were both more content.

“In another session, a client was stroking the horse with a big smile on her face and they were very close together. I could sense a slight nervousness underneath so I asked her if everything was okay and she said ‘yes’.

“I asked again and she said she was feeling a bit crowded so I asked what she could do to change that and she stepped back while the horse stayed in the same place.

“She had the powerful realisation that she never usually took a step back in her relationships and may not have realised that just from talking.

“Horses are masters of emotional agility — they don’t ruminate about the past or worry about the future as we do. They live completely in the moment so if they feel any fear they will flee, then shake the feeling off when the danger passes and go back to grazing.”

Ms Hudson says talking can still have benefits but there is a growing awareness that different methods work for different people.

She said: “We have a much better understanding of the neuroscience of healing, which involves the whole body. You have to find the right treatment at the right time but equine therapy means our insights are deeply felt and not just talked about. We are human beings yet so often we’re ‘human doings’ and rarely take the time to simply exist among nature. We’re constantly overloaded by information and under so much pressure — technology can be great but it has a dark side and we need to be able to give ourselves space.

“I had one client who’d been in therapy for a number of years but when they did an equine session they realised it was all about getting in touch with your body instead of thinking you’ve got to be perfect.

“We often want to ‘fix’ ourselves to meet an ideal but we’re all works in progress.”

Ms Hudson says looking after the horses benefits her too.

She said: “I’ll come back from a long day in London and sit with the horses while they feed, which is sometimes by moonlight if it has been a long day, and that gentle munching sound among the silence of the countryside is a really good way of balancing myself after long hours on the M40 or the M4.

“I’ve always loved horses but wasn’t conscious of how helpful they are when I was younger.

“Any horse is suitable for the therapy — with my two, Pica wears her heart on her sleeve and does a lot of the interacting but Stylish still has an important role to play. She will often be standing a little way off and bringing an enormous presence to the process.

“She did some incredible work with a client whose father had died and she couldn’t access her grief. Her father had loved horses but she was frightened of them and couldn’t understand his love for them.

“She arranged a session even though she was afraid and when she went into the paddock, it was Stylish who came up to her first.

“She has an almost maternal presence and just dropped her head and breathed around her heart area and within two minutes the tears were rolling down her cheeks.

“She said she ‘got it’ at last and was able to access her grief while understanding more about her father.”

Ms Hudson would like to have a bigger plot and more horses.

She said: “There are so many unwanted horses out there and I like the idea of being able to provide a home for a small herd so that they can help us find a home inside ourselves.

“I once saw a lovely illustration which said ‘home isn’t always a place’ and I think that’s very true.”