‘We all see ourselves in comedy of young love’ 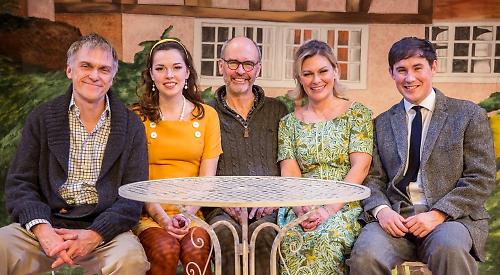 THE director of a comedy about mistaken identities says it will be impossible for audiences not to recognise themselves or others in the play.

Robin Herford is taking the reins of Alan Ayckbourn’s Relatively Speaking, which opened at the Mill at Sonning on Thursday last week (February 26).

It starts with a young couple, Greg and Ginny, whose relationship, after only a month, has become fractious.

The naive Greg is hurt by the many unsolicited gifts sent to Ginny’s London flat and her decision to visit her parents in the Buckinghamshire countryside alone.

What she’s actually doing is going to visit the home of her married boss, Philip, to put an end to their affair.

But when Greg impulsively follows Ginny a myriad of misunderstandings ensues. While he assumes that he is meeting his girlfriend’s parents, Philip initially marks him as his wife Sheila’s lover.

Herford says part of the joy of the play is the way it is constructed.

He said: “It is an amazing confection of misunderstandings and mistaken identities. We have two couples, one older and one younger, and it should be perfectly straightforward but it isn’t.

“You just cannot believe each scene hasn’t ended without someone spilling the beans for one reason or another.

“The reason I call it a confection is because of the layers of delicious meringue that just takes you closer to heaven. It is wonderfully truthful.

“It was written in the Sixties but human nature hasn’t changed very much and it hasn’t stopped being thoroughly funny.”

Herford had previously worked with Ayckbourn for 13 years — first as an actor and then as a director — so he feels he is uniquely placed to bring out all the nuances of the playwright’s work.

He said: “I was directed by Alan in the play, playing the younger man in 1977, so I have the inside track in a big way, and I then went on to become his assistant director and directed his plays.

“I hold a strange record in that I have appeared in more original Alan productions than any other actor. I can hear his tone of voice and we got on extremely well.”

He added: “People may think that Relatively Speaking is a light comedy but it isn’t — it’s more than that — it’s incredibly technical and very precise and the actors have had to work incredibly hard to find the right level of precision.”

Herford says he is particularly looking forward to the third scene — immediately after the interval — out on the patio at Philip and Sheila’s.

Herford says part of the reason Relatively Speaking became Ayckbourn’s breakthrough play is because audiences could see themselves in it.

“It has got that in spades,” he said. “You have got a young couple, very much in love but he is extremely naive. It is his first relationship and he is head over heels in love with this girl and you can see why he feels for her. She is more experienced and as we go through their pangs of love and the complicated quality of relationships, we then have the older couple who appear not to know each other as well as they think they do. If you don’t see yourselves in it you will see someone who is.”

He added: “I first saw this play when I was at St Andrews University back in the Sixties. It had been on at the West End and it was being put on by other companies. I had never even heard of Alan but I went to see a performance by the Dundee Rep and it just gripped me and had me laughing so much. It really is two hours of laughter.”

The set has been designed by Michael Holt and the show stars Christopher Bonwell as Greg, Lianne Harvey as Ginny, James Simmons as Philip and Rachel Fielding as Sheila.