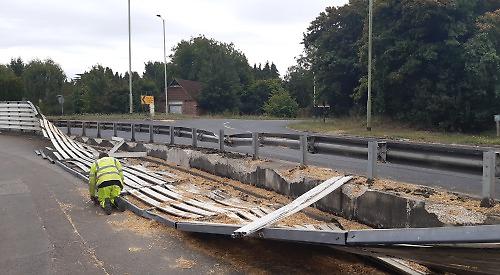 A CRASH barrier on a roundabout near Sonning was flattened after a trailer loaded with hay bales overturned.

The vehicle was being towed by a tractor, which is understood to have lost control as it turned left at the roundabout at the junction of Pound Lane with the A4 Bath Road at about 9.50am on Tuesday. No one was injured.

Police called to the scene directed traffic until the vehicle could be put back on its wheels and towed away. The impact tore down a 20ft section of the barrier, ripping its fixings from the concrete it was bolted into.

Engineers from Wokingham Borough Council assessed the damage while the slip road was closed.

Police said no arrests had been made.

There was heavy traffic on the same stretch of road that afternoon, which was the knock-on effect of a road closure in east Reading following a stabbing.