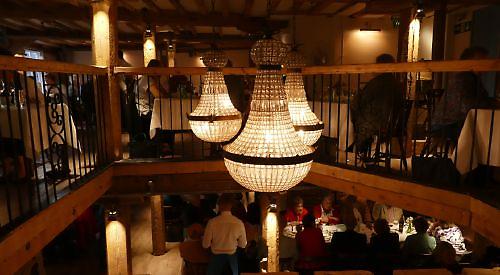 LIVE entertainment has returned to the Mill at Sonning with an all-new winter season of shows.

In keeping with the sentiments of Irving Berlin’s classic song Let’s Face the Music and Dance, there will be “moonlight and music and love and romance” for audiences to look forward to — even if they have to do so in reduced numbers at first.

The Mill’s managing and artistic director Sally Hughes confirmed that until March next year, all shows in the venue’s 215-seat auditorium will play to a socially distanced audience of 70.

Sally says: “The shows will be comedy, magic, ghost stories, glamorous cabarets, an evening with Debbie McGee, an evening with Lucy Fleming and Simon Williams — and so many more. I am even dusting off my Calamity Jane outfit and doing a concert version of the story of Doris Day.”

Having overseen the re-opening of the Mill as a restaurant at the end of July, Sally confirmed that theatre-goers would enjoy the same level of service on show nights. “No buffet,” she said. “That is no longer allowed. In its place a really delicious à la carte meal — and yes, steak pie and bread and butter pudding.” The Mill also has a pianist who entertains customers during their meal.

A raft of safety measures have been introduced for the winter season, starting with staggered arrival times. There will be hand sanitisers throughout the building, a one-way system and extra stewards on duty.

Masks and visors will have to be worn during the show.

Sally said: “The auditorium is being made to look like a cabaret space with little tables that will separate seats and little lamps on the tables.

“It will create a really cosy atmosphere so that you don’t feel like you are sitting in a two-thirds empty auditorium.

“The whole evening will be carefully socially distanced. Hopefully you will feel safe but have fun at the same time.”