Cabaret star will have you singing for supper 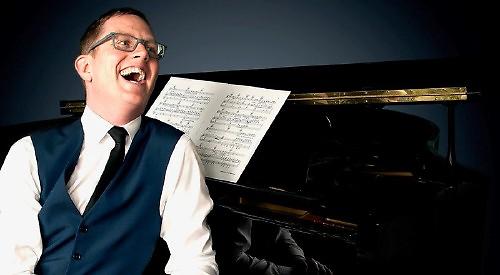 BEN STOCK knows what it takes to triumph over adversity.

The singer, actor and performer has appeared on stage for more than 20 years in major productions but it has not always gone to plan.

But rather than let any mishaps get him down they added fuel (and material) to his burning desire to go it alone and produce his own show on his terms.

Ben has performed his cabaret, a mix of songs and funny stories, to sold-out audiences across the UK, in New York and the Far East.

He will be touching down at the Mill at Sonning for two performances of Sing for Your Supper next Saturday (November 7) and be joined by musical director Inga Davis-Rutter and West End and TV star Jessica Martin as his special guest.

Ben said: “The show is a collection of songs that some people will know from the likes of Noel Coward, Andrew Lloyd Webber, Stephen Sondheim and Rogers and Hammerstein and some songs people won’t know, interlinked with stories of my life.

“I like to think of it as like a dinner party where one person talks more than the rest, which is what I tend to do anyway at dinner parties, and so everyone else can be relaxed. It will be a time when people can forget about what is going on outside and listen to some great music and some funny stories.”

Ben grew up in Bristol and, after a stint with the National Youth Theatre, he graduated from the Guildford School of acting in 1997 (first class) and won a prize for musical theatre.

His professional debut came as Alan-A-Dale in Robin Hood and the Babes in the Wood at the Watford Palace Theatre and he has never looked back.

He has had roles in West End productions such as Beauty & the Beast, Grease, Chitty Chitty Bang Bang and Joseph, and recent leading regional roles in Hello Dolly and The Glenn Miller Story and, before covid-19, an annual stint as an “Ugly Sister” in major pantomimes.

Ben is also a regular Music Hall performer and has appeared with the Players Theatre, The Hiss and Boo Theatre Company and The Paper Moon Theatre Company in London and around the country.

After years of working in the West End and touring shows, he began thinking of creating his own show but a show he was working on flopped, he decided to give it a go. “The reason I do a one-man show now is because I was in a show that was a terrible flop and none of us got paid,” he said.

“Sometimes things don’t work but it spurred me into wanting to put something else together which gave me the control of the performance which isn’t always the way if you’re self-employed because you have to do what other people want. It was about doing something that was mine.

“I’ve been through a lot, so my career has given me a lot to talk about. In my first performance in Joseph there was a major costume mishap, which I’ll reveal in my show - although I’m not doing the Full Monty or anything like that.

“There will also be stories from being on tour and how horrible that can be to do, a couple of stories of working with children and animals, which as you know, are the two no-no’s and what it’s like working in panto every year.

“Although a lot of the stories are theatrical, we have all turned up at a hotel on holiday and found that it doesn’t match up to the pictures in the brochure.”

Ben’s performances at the Mill are among his first since theatres were allowed the re-open and he is looking forward to it.

“The last few months have been very quiet,” he said. “I’ve done a lot of baking, which has mainly been a disaster. I’ve probably made the only banana bread that has taken two people to take out the oven and, if I was able to throw it, would probably take out a small herd of animals.

“It is almost a one person cabaret which at this moment in time has turned out to be a real bonus as the production values are not the same as a bigger show.”

Ben will be returning to the Mill on December 5 with a performance of Coward and Crackers with West End and international soprano Helen Power.

He said: “This is a show I have toured around the UK last year. The first half is mostly Noel Coward and other people linked to him. You don’t have to be Coward aficionados, I did it in Peterborough on a Wednesday afternoon for people who had never even heard of him. It is about making the material relevant to today. The second half is bringing a bit of Christmas cheer.

“Helen has a beautiful soprano voice and I have worked out that I have performed with Helen in more shows than any other.”

For more information and to book tickets, visit www.millatsonning.com