Comic relishing being back with live audience 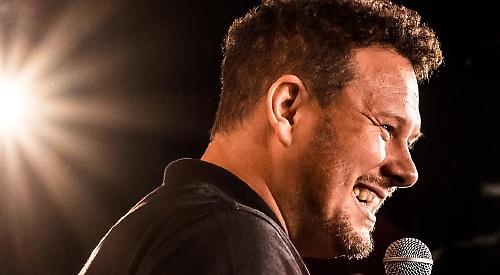 MAFF BROWN has had a lot on his plate this year.

Cancelled gigs, a house move during lockdown, becoming a stepfather and the perils of comedy gigs via Zoom.

But the stand-up and writer is keeping his fingers crossed that he can perform in front of a live audience again next month.

Maff is staging a night of comedy at the Mill at Sonning theatre on December 9, a week after the national coronavirus lockdown restrictions are expected to be eased.

He will be appearing alongside fellow comics Adam Bloom, who was named as one of Ricky Gervais’s favourite comedians, and Eleanor Tiernan, who was listed by the Sunday Times in its top 10 female stand-ups to watch.

Maff’s delivery has been described by Frank Skinner as “like gold coins coming out of a pirate’s chest” and he has plenty of material notwithstanding the pandemic.

He said: “It is difficult to avoid coronavirus and what we have found with doing comedy shows at the moment is if you don’t mention it, it creates a bit of a weird atmosphere but if you talk about it too much you are just boring people. For me, I have moved house twice, which has had its own problems. My girlfriend lives in Ireland and our relationship is fairly new. We have been together for about 10 months and she has a 12-year-old daughter so that’s quite an experience being a stepfather for the first time.

“We can go back and forth, although you have to fill in a locator form and having someone phoning you up at random points asking you if you are still there.”

Maff has performed and organised gigs at the Mill for about eight years. He said: “I’ve known Adam for years. He was a bit of a hero of mine and I used to watch him at the Comedy Store in London. We have also done gigs for the military together. Eleanor is on the top of her game right now and she has been absolutely brilliant. She has just been signed to one of the big agents so she will be on people’s TV screens very soon.”

Maff, who is known for his mischievous joke telling, spent 13 years in professional football as a player, coach and manager.

He played for Brentford and Hamilton Academicals before his career ended, aged 20, when a broken ankle failed to heal correctly. He then became a coach and was hired by Liverpool under then manager Gerrard Houllier.

After leaving the Reds, he went on to manage a side in Singapore but was sacked after two seasons, which enabled him to turn to comedy.

He said: “As it goes with football managers I got the sack and was paid to leave. It meant I didn’t have to work for a year but it made me work harder.

“When I came into comedy I wanted to be full-time as soon as possible. I began to be a compere and an MC, which isn’t the most glamorous job but if you are good at it there is a lot of work.

“But what I wanted was the stage time. I became known as a good compere but it took me five or six years to get out of that. I launched the Outside The Box Comedy Club in a function room in a Kingston pub. Frank Skinner did 10 weeks there because he wanted to get back into comedy and about 10 years ago I had Robin Williams perform.”

Maff said he first appreciated the value of laughter when watching comedians Laurel and Hardy with his brother.

“We used to just laugh and laugh,” he recalled. “I wanted to make my friends and parents laugh. It is like a drug — once you get that laugh, you just want it again and again. The bigger the audience the better.”

When the first lockdown was eased in July it became clear to him how much people needed to laugh.

Maff said: “When we were doing shows in July in a pub garden in New Malden we were so much in demand. People were just desperate to come out and enjoy themselves.

“Over this lockdown we have been doing gigs on Zoom. The first three or four gigs we had no audience feedback so we were pretty much just talking to a screen but then from the fifth or sixth we did it so we could see and have feedback from 10 audience members, although between 200 and 300 were watching it.

“There was one bloke where we couldn’t work out what was wrong with his microphone because it was constantly humming and then there was a ping and we realised he had sat his computer next door to his microphone.”

• For more information and to book tickets, visit www.millatsonning.com