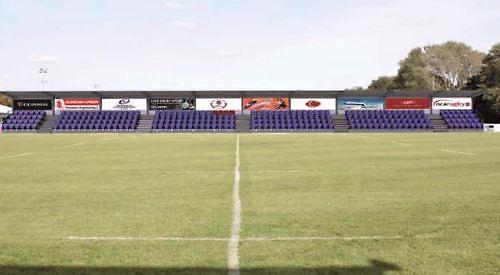 THE construction of a new
300-seater grandstand at Rams RFC has begun.

It is being installed at the Old Bath Road ground in Sonning by Duncan Lynch Precision Engineering.

The 60m long concrete base, which runs from one 22 line to the other on the clubhouse side of the ground, has been put in, along with the main structure. The next phase of the project will see the roof and tread boards added, with the hope the project will be completed by the end of February.

Other improvements to the ground made in recent months include new floodlights, an upgraded shack serving food and drink outside and a disabled access ramp.

Meanwhile, the National Clubs Association has confirmed that the proposed 2020/21 National Cup competition has been cancelled. However, the body has said that local friendly matches or
mini-tournaments could be played during April and May if coronavirus restrictions are lifted.

The Rams were set to take part in a pool that featured the Henley Hawks, Chinnor, Rosslyn Park, Esher and Barnes.

But following a series of meetings involving all 48 clubs in the NCA, there was unanimous agreement there would be insufficient time for an authentic competition, given the uncertainty over when training and playing will be allowed.

John Inverdale, who chairs the NCA, said: “With every
re-tiering and subsequent tightening of restrictions, it was getting harder to envisage the cup getting off the ground. It’s with a heavy heart we’ve made the call because there was a huge amount of enthusiasm for the idea, but ultimately we’ve had to concede defeat.”

Speaking about the possibility of action come the spring, he added: “It’s up to all our members to decide individually what they want to do. Some will shut up shop and prepare and hope for a September start next season, while others would like to play matches to satisfy the demands of their players, who are desperate to get back on the pitch.”