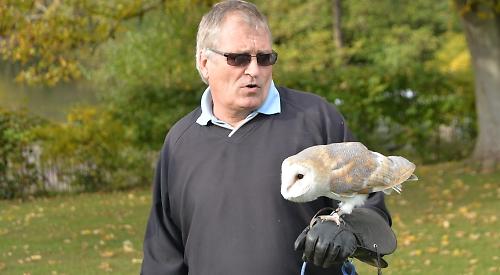 FIFTEEN barn owl boxes have been given a home in Sonning as part of a conservation project.

Professor Alastair Driver, who lives in the village, worked on a similar scheme to introduce the species on nearby farmland 25 years ago.

Now he hopes to do the same again with the support of villagers.

The project has received the backing of Prime Minister and local MP Theresa May, who lives in Sonning.

Prof Driver, who lives in Garde Road, said: “I initiated a project with the Hawk and Owl Trust for the installation of barn owl boxes on Reading University farmland at Sonning, funded by the National Rivers Authority.

“This project led to several pairs of barn owls breeding where there were none previously but the boxes have all rotted away so I decided it was time to resurrect the idea only this time doing it entirely with local funding.

“I went to a network of volunteers and people I know. It has been brilliant because I was overwhelmed with responses.”

Villagers paid £80 each for a box and the installation fees were paid for with a grant from the Sonning scarecrow committee. The boxes were installed last week when some of the people who bought them were introduced to barn owls from the Feather and Fur Falconry Centre at Hare Hatch.

Wiggy and Bailey were brought by business owner Sadie Shepherd and she spoke about the bird and how it lives in the wild.

Ms Shepherd will be monitoring the boxes next year to see if any owls nest there and will log any unregistered birds.

She said: “Projects like this are important because we’re not offering the birds food, we are offering them somewhere for 365 days a year.

“At the moment the Royal Society for the Protection of Birds has barn owls as green in a traffic light system, which is fantastic but also precarious.

“It could all change with one bad winter with snow or lots of hard rain. We have to keep on top of it.”

Prof Driver said: “The boxes are either on farmland or they’re in big back gardens close to lots of rough grassland. It’s the rough stuff where the voles are that the barn owls feed on.”

Villagers Max and Paula McNeill were among the volunteers who bought a box for their garden.

Mr McNeill said: “Ali asked if I was interested and I said ‘of course’. He told me about how the numbers have been brought up from 3,000 pairs to 8,000. I wanted to help and support Ali because the work he is doing is fantastic.”

Mrs May said: “As part of our commitment to be the first generation to leave the environment in a better state than we found it, the Government is very keen to promote local environmental management and improvement.

“This community-funded example from my own constituency, led by a known conservation expert, is a great model for communities around the country.

“I wish the project every success in its ambition to return this beautiful bird to its rightful place in the Sonning countryside.”