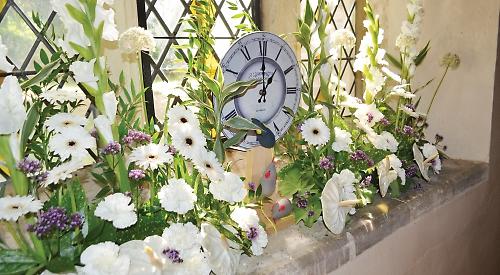 A FLOWER festival and open gardens event in South Stoke raised £3,500 towards electrifying the clock-winding mechanism at the village church.

Eleven gardens in the village were open on bank holiday Monday. Angela and Marcus Exley sold Pimm’s and lemonade to their visitors.

There were plants for sale outside St Andrew’s Church while inside there were floral displays created by villagers on the theme of “timepieces”. Robert Small, captain of the bellringers, said: “I’d like to thank everyone who came from far and wide. We’re absolutely over the moon with how it went.”

The current hand-wound system at St Andrew’s is almost 100 years old and requires the clock to be wound weekly. To electrify it will cost about £5,000.

Villager George Druce, 87, who has wound the clock for the last 20 years using a crank, said: “It will involve installing a small electric motor on the cabinet outside, which will eliminate all the counter weights which are so heavy that it’s hard winding the clock now. It’s part of the village to have the clock striking.”

Mr Druce is only the third person in the last 60 years to wind the clock. Before him Mr Small’s father, Eric, had the job and villager Frederick Broadway had it before him.