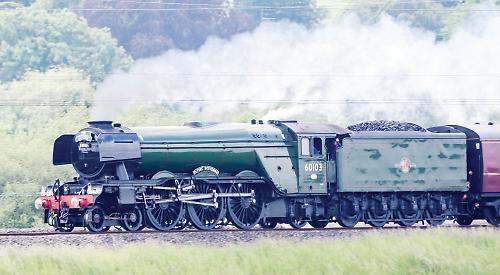 THIS is the moment that the iconic steam engine
Flying Scotsman thundered through the South Oxfordshire countryside.

She was passing through South Stoke on her way to Goring and Streatley station on Tuesday carrying 474 passengers on a five-hour tour of the Chiltern Hills.

The engine, formerly owned by the late Sir William McAlpine, of Fawley Hill, began running again in 2016 following a £4.2 million restoration by the National Railway Museum.

Her trip started at London Paddington and passed through Buckinghamshire to Bicester station.

The locomotive then went south to Didcot, via Oxford, before heading through

Goring and Pangbourne with the trip finishing at London Victoria.

Thousands of enthusiasts gathered at stations and on bridges along the route to take photographs of the train.

John Bateman, from Pangbourne, took photographs from a spot he knows from his commute to work at Oakwood Bespoke Joinery, near Benson, where he is joinery manager.

Mr Bateman said: “I’m a keen amateur photographer and I’m always looking for interesting new images to take. I heard the train was passing through Reading, so I went up to South Stoke and only had to wait 20 minutes for it to go past.

“I see the train line on my way to work and knew it would be a good vantage point for a picture.

“The opportunity to take a picture like that does not come around too often. You only get about five seconds to take a shot before it had gone past again.”

Sir William, who passed away in March, rescued the locomotive in 1973, when it was stranded in America after owner Alan Pegler was declared bankrupt. He paid $72,500, about £25,000 then, to be shipped from San Francisco to Liverpool.

Sir William owned it for 23 years and ran day trips. During his ownership the train was taken apart for repairs twice.

Record producer Pete Waterman bought a 50 per stake in it in 1993 before it was bought outright by businessman Tony Marchington in 1996.

Lady McAlpine said a friend had sent her a video on Tuesday night of Flying Scotsman on her journey.

She said: “I am absolutely thrilled, as Bill would have been, to see that she is out working hard and out doing what she is supposed to do.

“He was worried she was going to be set in aspic in the museum and that was never what he intended when he persuaded the museum to take her.

“Bill would have been over the moon to see her out and about so much.”

The tour is run by Steam Dreams, of Surrey, which takes the engine and other steam trains across the country for trips.

Ben Roberts, who works for the operator, said the service on Tuesday was fully booked four months in advance.

He added: “We aren’t allowed to give times on when it runs because it causes issues with people going on to the line to see it.”