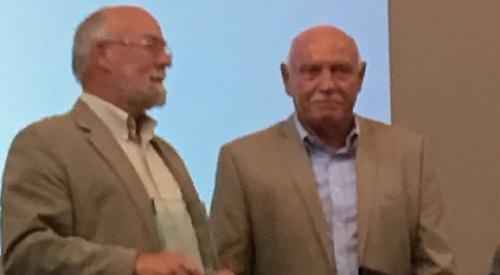 SOUTH Stoke Community Shop has been honoured for its use of volunteers.

Nicky Kennedy, who helped start the shop and still works there, was named volunteer of the year at the awards ceremony held at Oxford town hall.

The business has used 59 volunteers since it opened five years ago and currently has 40 active volunteers who cover 50 hours a week between them or about 2,500 hours a year. It has one paid part-time manager. The shop is housed in a converted shipping container on the recreation ground and supports local businesses such as the butcher, baker and farm shop and also offers hot drinks, ice creams and toilet facilities.

Mrs Kennedy was nominated for making the community shop a success since she first became involved in 2009.

She led the planning, fund-raising and set-up of the shop, which opened in February 2013 and has traded profitably ever since.

Mrs Kennedy, who still recruits volunteers and fund-raises, said she was “thrilled” with the award but added: “All along this has been a team effort and none of it would be possible without our wonderful team of volunteers.”

Mick Woodall, who chairs the shop’s board, said the award was an “honour” and “a delight”.

“Congratulations to Nicky and all the volunteers at South Stoke Shop,” he said.

“We have always said that the shop is more than just about trading profitably, it’s a community in itself and enriches the community.”