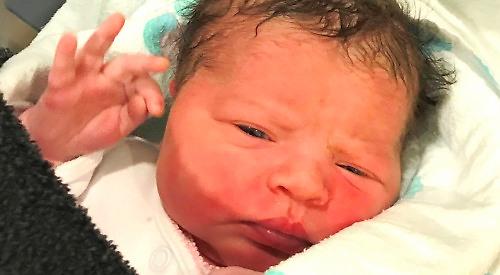 A PUB landlord helped deliver his baby daughter while on the phone to the ambulance service.

Simon Duffy, who runs the Perch and Pike in South Stoke with his partner Sofie Hjelte, was surprised when she began having contractions at about 12.45am on Sunday.

He packed an overnight bag and was preparing to drive 33-year-old Ms Hjelte to the Royal Berkshire Hospital in Reading when her contractions intensified.

Mr Duffy called 999 and paramedics were dispatched to oversee a home birth.

However, the baby arrived at about 1.10am while he was still on the phone to the operator, who guided him through the process.

The ambulance arrived 20 minutes later and the crew let Mr Duffy cut the umbilical cord with a surgical tool before taking mother and child to hospital. Ms Hjelte and the baby are expected to return to the couple’s home above the pub in the next few days. Chloe, who weighed just over 4kg, will then be able to meet her two-year-old sister Phoebe for the first time.

Mr Duffy, 43, said: “There’s absolutely no doubt that I was petrified. I’m probably the worst person to be stuck in that situation with because I’m squeamish around blood or anything medical really.

“But when you’re thrown into that situation, I think instinct takes over as you’ve got no choice but to get on with it.”

He and Ms Hjelte, who grew up in Sweden and has lived in Britain for about 15 years, have run the Brakspear pub since 2016.

They met when she was working at the former Dog and Duck pub in Highmoor. They were initially friends but got together shortly after Miss Hjelte joined his team at the Rising Sun in Witheridge Hill before they moved to the Perch and Pike.

Chloe had been 12 days overdue so Ms Hjelte was scheduled to be induced on Sunday morning.

She went to bed early on Saturday night, leaving her partner to run the pub and close up before joining her.

Mr Duffy had only just got into bed when she nudged him to say the contractions had started.

He called his mother Linda, who lives in Wargrave, and she began driving over to look after Phoebe.

Mr Duffy said: “I phoned the hospital to warn them the baby was coming and thought I’d be able to drive her there so I packed a bag with all the usual items a mum and baby would need.

“However, the contractions were getting quicker and quicker and Sofie said she wasn’t even going to make it to the car.

“I called for an ambulance and still assumed they’d be the ones to deliver her.

“But then Sofie said she could feel everything moving so I relayed that to the operator and realised I was going to have to deal with it.

“It was probably the most surreal experience of my life.

“It was a conventional birth in many ways but, without going into too much detail, I had to do all the things that a midwife would do. It wasn’t just a case of standing around giving instructions, put it that way!

“The operator was telling me what to do and I was doing my best to listen to them but part of me was panicking and not really listening at all.

“The adrenaline was going and I didn’t have time to think about how unusual it was until Sofie and Chloe were en route to the hospital and I was following in the car.

“The pub opened as normal the next day and the village network has been working overtime to spread the news. I think a lot of people are talking about it.

“I’m very proud of myself because I wouldn’t have thought I was capable but I’m far more proud of Sofie for being such a strong person.

“It must have been very difficult going through that with only a muppet like me for support and none of the pain relief like gas and air that women usually have access to. She deserves all the credit for this.”