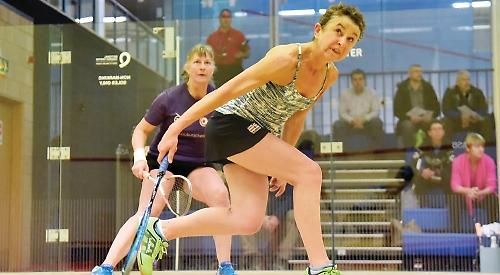 BIX’S Jill Campion fought back from 2-0 down to win 3-2 and retain the British over 55 national title.

Campion, a member of Henley Squash Club, has now become the first person to retain this category for three years in succession.

In the quarter-finals Campion defeated newcomer Kim Johnson 3-0. In her semi-final with Sarah Howlett, Campion came from 1-0 down to secure a final spot with a 3-1 victory.

Speaking of the early rounds Campion said: “This year was really tough and I had to fight hard in each match. The quarter final against Kim Johnson was fast-paced and physically testing and although I won 3-0, the games were close.

“In my semi-final against Sarah Howlett from Cambridgeshire I knew I would have to rethink my game when I quickly found myself 1-0 down.

“Luckily I found my range in the second game and managed to keep Sarah at the back of the court with high lobs, setting me up to win points at the front. Having won the second game, I maintained this tactic and gradually gained confidence, winning the match 3-1. It was a hugely tactical match — less physical than my first match but mentally more difficult. In the final Campion came up against Lesley Sturgess who had defeated over 55s world champion Karen Hume in the other semi-final. Sturgess raced into a 2-0 lead only for Campion to fight back to win the match and title 3-2.

Campion added: “I last played Lesley in the the final of the British open over 55 last June. Then I quickly lost the first two games and managed to stage a comeback, winning 3-2.

“This time I was determined to get ahead quickly. However, things didn’t go according to plan. The first game was anyone’s. But Lesley was clearly getting into her stride with excellent volleys and perfect lengths, putting me under pressure and she took the first game. I was struggling to work out how to counter this and quickly lost the second. 2-0 down, clearly there was no margin for error.

“I started putting a lot more height on the ball, preventing Lesley from attacking it and won the crucial third game and then the fourth. I had managed to turn the tables — Lesley was feeling the pressure and her shots were becoming less accurate, which allowed me to win the fifth game and the match.

“I am absolutely thrilled as to be honest at 2-0 down I thought I was going to lose.”