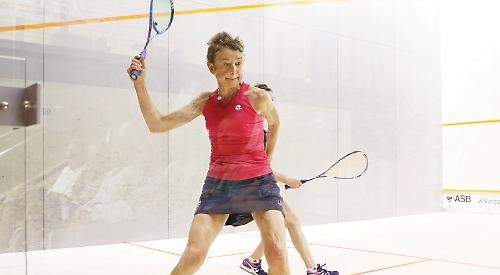 A WOMAN from Bix has won the World Masters Championship for the first time.

Jill Campion beat Karen Hume in the final of the over 60s tournament to secure the title in Virginia, USA.

The World Masters Championship takes place every two years and attracts around 800 participants from more than 40 countries.

The event moves from continent to continent and this year was held at the newly built McArthur Squash Centre, Boar’s Head Resort in Charlottesville, Virginia where facilities include 12 glass-back squash courts and two glass show courts with tiered seating.

Campion’s first two matches were relatively straight forward and she reached the semi-finals without being seriously challenged.

The semi-final was different as Campion was playing Maureen Duke, an English player who plays over 50s county squash but doesn’t play the masters’ circuit. To get to the semi-final Duke had beaten the number five and three seeds.

Campion lost the first game quickly and had to change her tactics. In the second game she attacked the ball more, taking it as early as she could, so that Duke didn’t have time to play her touch shots. The tactic worked as Campion was able to dominate and won the next three games to secure a final spot.

The final was a rerun of the 2016 over 55s World Masters final in Johannesburg, against fellow England team member Karen Hume.

Two years ago Campion won the first two games relatively comfortably but failed to capitalise on this lead as Hume fought back to win 3-2.

This time around Hume hit the ball low, hard and accurately from the start, preventing Campion from getting into her stride and won the first game 11-5.

In the second set Campion tried to concentrate on getting her width and length while continuing to play at a fast pace. Slowly she edged ahead and managed to win that game 12-10, levelling the score at 1-1.

Hume dominated the third game from start to finish, winning 11-5 to go 2-1 up.

In the fourth game Campion concentrated on hitting the best possible width and length, and varying the pace. This created the opportunities she needed as she sensed that Hume was tiring and so played a few short to the font, which proved to be effective. Hume fought back, but Campion managed to win the fourth game 11-9 to level the match at 2-2.

In the final set Campion played the ball deep and tight to the back and found her length and width, forcing errors from Hume. Campion’s game started flowing as she ran out 11-5 winner to secure the title.

This was the fourth time Campion had played in the World Masters, her first in the over 60s age category, and her second final.