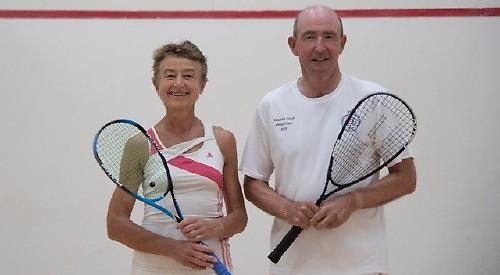 Campion, who lives in Bix and is also a member of the Henley Squash Club, said: “I hadn’t played Ian before, nor had I seen him play.

“All I knew was that he is highly experienced and talented player and won the national championships as a junior.

“It was a highly tactical match as we both tried to work out each other’s strengths and weaknesses. I had to adapt my usual game of high, floating lob serves combined with straight rallies as Ian is well over six foot tall and was able to play winning follies off my high shots.”

Campion lost the first game but managed to win the second by keeping the ball out of the air and playing tight drop shots.

Nicholson changed his game in the third, playing a faster, harder-hitting game. Finding herself 2-1 down, Campion won the fourth game before forcing her opponent into errors to secure the match by winning the fifth.

Speaking after the win Campion added: “I was absolutely thrilled to win and am proud to retain my title. I first won this tournament in 2019. The match we played last week was the final of the 2020 tournament.”

However, facing Shane Ballie, who, like Campion, has represented England at Masters level and is 15 years her junior, she went down to a 3-0 defeat.

Campion added: “Shane has always been a better player than me, plus she is 15 years younger than me, so the odds were clearly against me in this one.

“It was a totally different kind of match to the previous one. Shane takes the ball early, hits it hard and moves incredibly well. While I like the pace, I knew that I had to slow it down and float the ball around to try to unsettle her. This worked well in the first and second games, with the scores pretty much neck-and-neck until 7-7, when in both cases Shane upped her game. At 2-0 up, she kept the momentum going and won 3-0.”

Meanwhile, the Royal Automobile Club has named its Ladies’ squash tournament The Campion Cup, in her honour.

The club has a tradition of naming tournaments to honour members who have achieved significant success in their sport.

Campion said: “I was absolutely flabbergasted when the chairman told me that the club wanted to name the tournament after me. It is such as honour — I thought that kind of thing only happened to other people, and even then only once they had died.

“The club looked for a suitable trophy in its coffers and found this amazing good rose bowl, or maybe it’s a punch bowl!

“Having, rather unexpectedly, got to the final of the inaugural tournament I knew that I was highly unlikely to win it — just as well as it wouldn’t look very good to win your own tournament.”